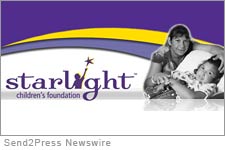 LOS ANGELES, Calif. (SEND2PRESS NEWSWIRE) — Starlight Children’s Foundation is currently auctioning off a VIP package for two lucky individuals to walk the red carpet and see popular television celebrities up close at this year’s All-Star Emmy® Award Show. Anyone can bid on two tickets to the Emmy Award Show on Sunday, Sept. 20 at the Nokia Theater in the heart of the exciting downtown complex LA Live and know that all of the proceeds will benefit Starlight’s seriously ill children and their family members.

Thanks to the generosity of HBO, the winning bidders will be able to keep the party going into the night at HBO’s exclusive, invitation-only, star-studded party following the Emmy Awards. Held at the Pacific Design Center in West Hollywood, HBO’s Emmy after-party is notorious for being filled with A-list celebrities. The party will get started after the Emmys around 9 p.m. with dinner, dancing and some serious people-watching.

The auction is live now and will end on the evening of Sept. 2. Anyone can place their bid now to rub elbows with some of today’s biggest television stars at: www.ebay.com/starlight .

When a child or teenager has a serious medical condition, everyone in the family is affected. For 25 years, Starlight Children’s Foundation has been dedicated to helping seriously ill children and their families cope with their pain, fear and isolation through entertainment, education and family activities. Starlight’s programs have been proven to distract children from their pain, help them better understand and manage their illnesses, and connect families facing similar challenges so that no one feels alone.

Through a network of chapters and offices, Starlight provides ongoing support to children, parents and siblings in all U.S. states and Canadian provinces with an array of outpatient, hospital-based and Web offerings. Programs are also delivered internationally through affiliates in Australia, Japan and the United Kingdom.