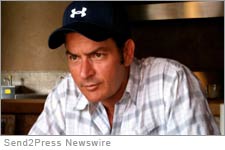 AUSTIN, Texas (SEND2PRESS NEWSWIRE) — Appearing on The Alex Jones Show today to discuss his video address to Barack Obama, Charlie Sheen has challenged those who have publicly attacked him for speaking out on 9/11 – particularly Meghan McCain, Rush Limbaugh, Sean Hannity and Bill O’Reilly – to debate him on CNN’s Larry King Live.

Following the publication of Sheen’s “20 Minutes With The President,” a fictionalized account of a meeting with Barack Obama in which Sheen implores the President to reopen the investigation of 9/11 in light of the majority of the 9/11 Commission members publicly denouncing the official story as a deception, McCain attacked Sheen on ABC’s top rated show The View, comparing people who question 9/11 with holocaust deniers.

“I quoted Charlie Sheen yesterday about his experience with prostitutes, so really you’re the one I should be listening to about 9/11?… I am not going to take my political advice from Charlie Sheen,” stated McCain, daughter of the former Republican nominee John McCain.

McCain’s sophomoric reliance on attacking Sheen on the foundation of decades-old events in his personal life, while failing to address even one of the 20 pieces of evidence raised in his letter to Obama, is typical of the media response to Sheen’s challenge thus far.

Amongst the scoffers and debunkers, not one corporate media outfit has managed to actually address a single point Sheen raised in his letter, resorting instead to childish quips and badly researched proclamations.

A familiar theme arising out of such hit pieces is an effort to imply that Sheen’s questioning of the official 9/11 story is somehow an “outrage” and hurtful to the family members of the victims, despite the fact that many of the victims’ family members share the same questions.

Furthermore, claiming that people who doubt the government story are on a par with holocaust deniers completely ignores the fact that six of the ten 9/11 Commission members, along with scores of other highly credible former and current government officials, intelligence professionals, military officials, scientists, structural engineers and architects, and legal scholars have all publicly questioned the official version of events behind September 11.

Fox News talking heads Bill O’Reilly and Sean Hannity, as well as popular radio host Rush Limbaugh, have also attempted to attack Sheen’s credibility while failing to discuss any of the subjects he actually raised.

In response, Sheen told The Alex Jones Show that he is challenging any one or all of McCain, Hannity, Limbaugh or O’Reilly to a debate about 9/11 on CNN’s Larry King Live or any other television show in Los Angeles, adding that the show must be broadcast live to prevent bias editing.

“Let’s do it,” Sheen told the Alex Jones Show Friday, “I issue the challenge to debate Meghan McCain, Rush Limbaugh, Sen Hannity, Bill O’Reilly, bring them all, Bob Mcilvaine and I will join you on Larry King Live and you guys bring whatever you’ve got … and we’ll show up with the truth and we’ll just see how it goes – we’re not hiding,” added Sheen.

Watch the clip from The View at www.youtube.com/watch?v=yENcu5_7Mdk .

For media requests on this subject email sheen@infowars.com .

The Alex Jones Show broadcasts live from Austin, TX from 11 a.m. – 3 p.m. Central. Alex Jones’ show and Web sites Infowars.com and PrisonPlanet.com are a focal point and a forum where many prominent figures from academia, the political world and Hollywood have spoken out about what really happened on September 11th.

News Source: The Alex Jones Show :: This press release was issued by Send2Press® and is Copyright © 2009 Neotrope® News Network – all rights reserved.