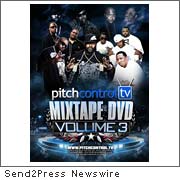 HOUSTON, Texas (SEND2PRESS NEWSWIRE) — DJ Screw, HAWK, Big Moe, and Pimp C’s influence on the sound and culture of Houston, TX is immeasurable. Aside from Rap-A-Lot Records, the Screwed Up Click and Underground Kingz are entirely responsible for crafting Texas’ distinct musical identity. Pitch Control TV is honoring H-Town’s Fallen Soldiers in Volume 3 of its Mixtape DVD Series, which is being released today. The project includes video tributes and prized moments with the artists prior to their passing.

As DJ Screw, the originator of “Screw & Chopped” music, from which T-Pain borrowed the name for his recent hit single says, “When you say Texas, you say Screwed Up Texas.” Big Moe, an original member of the Screwed Up Click, formed his own blend of Hip Hop and R&B, which started a trend among many Houston talents (Z-Ro, Chamillionaire, Trae) and eventually led him to sign a major deal with Priority Records.

Another original member was HAWK, who had radio success with his mega-hit single “You Already Know”, off his self-titled album HAWK. Last, but certainly not least, legendary artist, writer and producer Pimp C of UGK, coined and exemplified the term “Country Rap Tunes,” and along with group member Bun B, went on to be Grammy Nominated for the group’s single “International Players Anthem” in 2008. If it weren’t for the contributions of the aforementioned artists, you may have never heard of Texas’ current roster of artists, such as Z-Ro, Chamillionaire, Paul Wall, and Slim Thug.

Volume 3 is an inventive format containing almost 2 hours of exclusive material-interviews, concerts, music videos and behind the scenes footage with the hottest and most respected artists in Texas. This new DVD also highlights some positive moments, which is often lost in the “rap world,” such as Trae tha Truth being recognized for his accomplishments, in the city of Houston and being given his own holiday, known as “TRAE DAY.”

“I try to focus more on those timeless moments, and leave the beef to the mainstream media,” said director Ariel Santschi.

Be sure to check out www.pitchcontroltv.com to keep up with the streets and latest music in the South.