You are here: Home › Starlight Children’s Foundation Launches New Website as its 3-year Rebranding Process Comes to a Close
By Send2Press Newswire on September 30, 2009 in NonProfit and Charities, Press Releases 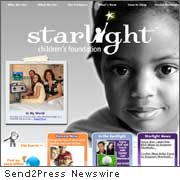 LOS ANGELES, Calif. (SEND2PRESS NEWSWIRE) — On the heels of its 25th anniversary, Starlight Children’s Foundation has just unveiled the final piece of its 3-year rebranding initiative with the launch of an overhauled www.starlight.org and 11 related chapter and office Web sites. The strategic rebranding process also included a name change, logo change, development of a mission statement and tagline, and the creation of a new PSA campaign.

“Starlight has a storied past and a bright future,” said Paula Van Ness, CEO of Starlight. “Our new brand was carefully crafted to showcase that, and our new look and ad campaign reflects our personality, culture, diversity and experience.”

“When you actually see the difference Starlight Children’s Foundation makes in the lives of seriously ill children and their families, it truly touches your heart,” says Jeremy Feldman, Associate Creative Director at G2. “With that in mind, we developed a strategy to help Starlight become more visible and gain even more recognition. Using a variety of brand planning techniques, including an audit of the foundation’s existing brand, our goal was to create an ownable identity to help donors, health care organizations and families alike differentiate Starlight from other charities assisting kids in need.”

“Starlight is a great organization with a powerful mission, so when they asked for help to more effectively tell their story, we were excited by the challenge,” says Ronin Chief Creative Officer John Swisher. “It was important to us to create a new logo that communicated in a glance the organization’s purpose and a tagline that would inspire supporters to get involved. The ‘my world’ advertising campaign we developed builds on those elements by allowing the public to get to know the children and families whose lives are changed by Starlight every day.”

With Ronin’s guidance, Starlight adopted a logo closer to its original roots and the logos of its international affiliates. Central to the new logo is a star shining down on a child — exemplifying Starlight’s commitment to brightening the lives of seriously ill children.

Ronin then unveiled a PSA campaign including television, radio, print and online ads that give a face and a voice to Starlight’s mission. Elements of the campaign can be viewed at www.starlight.org/psa . Requests for PSAs can be directed to psa@starlight.org .

The tagline Ronin developed calls Starlight supporters to action: Help us brighten their world, a little each day.

With new brand elements in place, Starlight’s staff brought everything together in its new Web sites – designed to be both more visually appealing and simpler to navigate.

When a child or teenager has a serious medical condition, everyone in the family is affected. For 25 years, Starlight Children’s Foundation has been dedicated to helping seriously ill children and their families cope with their pain, fear and isolation through entertainment, education and family activities. Starlight’s programs have been proven to distract children from their pain, help them better understand and manage their illnesses, and connect families facing similar challenges so that no one feels alone. Through a network of chapters and offices, Starlight provides ongoing support to children, parents and siblings in all U.S. states and Canadian provinces with an array of outpatient, hospital-based and Web offerings. Programs are also delivered internationally through affiliates in Australia, Japan and the United Kingdom.