You are here: Home › Viral YouTube Sensation ‘Duck Song’ Waddling into Hearts of Teens
By Send2Press Newswire on October 13, 2009 in Music and Recording Industry, Press Releases 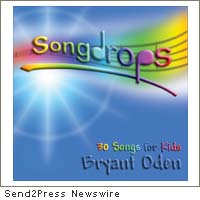 BOULDER, Colo. (SEND2PRESS NEWSWIRE) — What music are teens into these days? Taylor Swift? Sure. Jonas Brothers? You bet. Beyonce? Absolutely. A simple children’s song about a duck asking for grapes at a lemonade stand? Yup. As unlikely as it sounds, “The Duck Song,” the lead song on Bryant Oden’s debut CD “Songdrops: 30 Songs for Kids” (being released Nov. 1st through www.Songdrops.com) has been all the rage in schools across the U.S. and beyond.

Videos of the song have millions of views on YouTube, and hundreds of kids have posted their own videos of it. A few YouTube comments: “Everyone at my school is singing it.” “My friends and me sing this all the time.” “This is THE big thing at our school now.” “Kids sing this down the hallways between classes.”

So what is it about “The Duck Song” that makes it so popular with teens? “I’m really not sure,” said Oden. “I didn’t expect the song to take off the way it has. I think I lucked into some kind of rare combination of a catchy tune, a good story based on an old joke, and a fun main character. It was also helped a lot by a 15 year old YouTube filmmaker, Forrestfire101, who made a great animated video of the song. That really helped people connect with it and gave them fun visuals for it.”

Oden, who owns the popular humor website www.InnocentEnglish.com, has spent the last year working on the Songdrops CD. “I tried to keep it fast-moving and fun, with a lot of variety, to work for all ages of kids and their parents.”

Early indications are “Songdrops: 30 Songs for Kids” will be well received. Several songs have over 100,000 YouTube views. And music reviewer Andrea Guy wrote “This is definitely an album the kids will go wild for, and to make it better, it’s an album that won’t drive their parents to distraction when the songs are played on repeat.”

Will any of the other songs on the CD take off the way The Duck Song has? “You never know,” Oden mused. “The videos for ‘I Got a Pea’ already have a few hundred thousand YouTube views, and are growing fast. But what’s happening with “The Duck Song” is pretty amazing and probably a one-time thing.”

Videos of “The Duck Song,” “I Got a Pea,” and other songs can be seen at Songdrops.com. The CD “Songdrops: 30 Songs for Kids” is available through CDbaby.com and iTunes. Bryant Oden is also releasing a second album, “Songdrops 2: Bedtime Songs” on November 15th.

News Source: Songdrops Music :: This press release was issued by Send2Press® and is Copyright © 2009 Neotrope® News Network – all rights reserved.