You are here: Home › Foreclosure Inventory Remains at All-time High
By Send2Press Newswire on October 13, 2009 in Press Releases, Real Estate 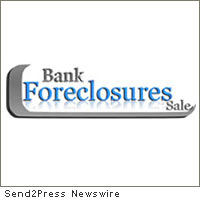 MIAMI, Fla. (SEND2PRESS NEWSWIRE) — Bank Foreclosures Sale reports that “Making Home Affordable,” a $75 billion federal government-backed initiative to keep up to seven to nine million Americans in their homes by preventing avoidable foreclosures, may have an uphill battle.

The Associated Press recently revealed news from the Office of the Comptroller of the Currency and the Office of Thrift Supervision report, that more than 50 percent of distressed homeowners who had their home loans modified in the first half of 2008 “missed at least two months of payments a year later.”

Job loss is the main culprit. Unemployed homeowners can’t afford their mortgages because cash flow is less or non-existent.

The good news is that the housing recovery program is still in its early stages. To date, only 12 percent of eligible borrowers nationwide (360,000) have taken advantage of the opportunity.

In addition, according to data released by the Labor Department, in August, jobless rates were down in most metro areas.

“This is a positive sign, but the road ahead is still rocky,” says Jack Cooksey, real estate expert for Bank Foreclosures Sale.

Also, other real estate reports indicate that there has been a slight improvement in existing home sales, but national forecasts are still not optimistic.

“The recent trend shows broad improvement in most of the country, but with an expected rise in foreclosures over the next 12 months, we need to maintain a healthy level of ready buyers to absorb the inventory,” explains a chief economist with the National Association of REALTORS(R).

Hundreds of thousands of homeowners are still unable to make their mortgage payments and are being forced into foreclosure.

“While this is a decrease of less than one percent from the previous month,” explains Cooksey, “it’s still an increase of nearly 18 percent from August 2008. There’s still a large supply of foreclosure properties in the pipeline.”