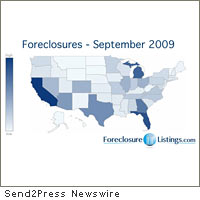 NEW YORK, N.Y. (SEND2PRESS NEWSWIRE) — According to statistics from ForeclosureListings.com, foreclosure rates are still on the rise across the country, a sure sign that the recession is far from over. The same statistics show that average foreclosure sale prices are also on the rise. The combination means that it is a strong market and a good opportunity for investment buyers.

The major increases were driven mainly by changes in urban areas. In Arizona, the statewide increase was pushed by a massive 81.37 percent increase in Phoenix. Other cities with big increases included: Las Vegas, NV at 47.47 percent; Atlanta, GA at 39.96 percent; Chicago, IL at 36.27 percent; and Houston, TX at 33.29 percent. The major cities with the lowest foreclosure rate increases were: Indianapolis, IN with 5.28 percent and Memphis, TN with 7.64 percent.

The average price of foreclosures was also on the rise with Arizona first with a 113.67 percent increase from $101,001.00 to $215,826.00 and Georgia experiencing a huge 45.45 percent increase in price as the average price went from $129,187.00 to $187,906.00. Michigan and Texas also saw double digit price increases while several other states saw modest increases. Only Vermont saw a price drop of -2.41 percent. The three most expensive states to buy a home, Alaska, Hawaii and California maintained the highest overall foreclosure sale prices.

These statistics show that the foreclosure markets are still volatile but that houses are gaining rapidly in value. For the savvy investor who can afford risk, now is a great time to get involved.