You are here: Home › Scenario Paintball Films’ Documentary Brings History to Life at West Point
By Send2Press Newswire on October 14, 2009 in Press Releases, Video and DVD 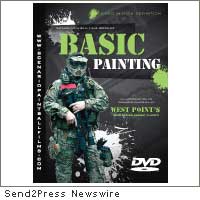 MORRISTOWN, N.J. (SEND2PRESS NEWSWIRE) — Never before has a group of “real filmmakers” come together to produce a worthwhile, full length, documentary-style film that shows the real deal when it comes to scenario paintball. Scenario Paintball Films (SPF) announces the release of its first project – Basic Painting – shot on location at West Point, NY.

“We could not have done this piece without the tremendous cooperation and participation of the U.S. military,” says Jay Lavely, executive producer for SPF.

Together with the Department of Defense Public Affairs, this first DVD, Basic Painting, introduces the viewer to the world of scenario paintball. In the DVD, cadets and scenario paintball players reenact the infamous World War II’s Battle of Riva Ridge.

Basic Painting, this first in a proposed series of films, is designed to entertain and to educate. It’s not just for people who play paintball. It’s for people who are looking for a new form of engaging entertainment.

Basic Painting follows the cadets as they prepare for the weekend and the players who form the two opposing forces. World War II’s Battle of Riva Ridge comes to life on the hollow grounds of West Point through cadet, captain and player interviews; fast-paced action; artillery simulators; heart-pounding sound effects; and more.

“Basic Painting is an entertainment piece with an instructional component into the very tight-knit world of scenario paintball,” Lavely says. “During the course of the documentary, we highlight the most important aspects of scenario paintball with a special focus on: techniques, weaponry, communications net, and camaraderie.”

Leading industry professionals have watched Basic Painting and they all agree that it’s going to be a resounding success.

Aaron Kneppar, co-producer, adds that, “Many non-paintballers have also watched it and have been equally entertained. That is really the main idea – to be entertaining and informative to both paintballers and non-players and to excite them into wanting to try the sport.”

DVDs are priced at $19.95. Wholesale packages are also available for distributors where DVDs may be purchased for as low as $5 (including shipping). To contact sales, e-mail: aaron@scenariopaintballfilms.com .

SPF is a New York City and New Jersey-based production company. Lavely, executive producer, has been involved in the film and television industry for 20 years, lending his talents to a variety of clients, most notably working directly with the Line Producer on HBO’s critically-acclaimed miniseries “From the Earth to the Moon.” He’s also served as Line Producer and/or Production Manager for major networks including ABC, NBC, CBS, Kingworld, Oxygen Media Network, E!, Style Network, VH1, and Discovery Channel.

Kneppar, co-producer and subject matter expert, purchased his first paintball marker in the fall of 1998. And, like most, he immediately fell in love with the game. He brings 10 years of paintball experience and the collective input and support of 10 of the top scenario teams in the northeast, with an estimated 100 active players and another 400 reserves.