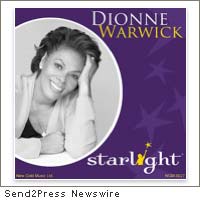 LOS ANGELES, Calif. (SEND2PRESS NEWSWIRE) — Today Starlight Children’s Foundation(TM) and New Gold Music Ltd. are excited to release the song “Starlight,” sung by the legendary Dionne Warwick, and written by Dean Pitchford, prolific writer of Fame and creator of Footloose, and William Goldstein, whose versatile career includes the original music for NBC’s Fame TV series. Ms. Warwick, Pitchford and Goldstein are donating 100 percent of their royalties to Starlight Children’s Foundation as a way to raise as much money as possible for Starlight. The track is available for download on Amazon and iTunes.

“The song was inspired by the resilient spirits of all of the children in the world suffering with a chronic or life-threatening illness,” says Goldstein. “As an expression of our belief of putting positive energy into the world and using our talents to make a difference, we are all happy to donate the song to Starlight, so that it may benefit families struggling with childhood illness for decades to come.”

“When Bill and Dean brought this song to me, I instantly felt connected to its message of shining a little light into the lives of people who need it most,” said Warwick. “I admire the work of Starlight Children’s Foundation and know that if the song brings hope to even just one sick child, we have succeeded.”

“Starlight” is a recognition of the compassionate work of Starlight Children’s Foundation, which for more than 25 years has been dedicated to helping seriously ill children and their families cope with their pain, fear and isolation through entertainment, education and family activities.

“We are very excited about the release of ‘Starlight’ and know that it will be a lasting resource to aid in our mission to help ill children and their families,” said Starlight CEO Paula Van Ness. “It is an honor to be the benefactor of such grace, talent and generosity, and we cannot thank Dionne, Dean and William enough.”

Download the song now by visiting Amazon.com or iTunes.

When a child or teenager has a serious medical condition, everyone in the family is affected. For 25 years, Starlight Children’s Foundation has been dedicated to helping seriously ill children and their families cope with their pain, fear and isolation through entertainment, education and family activities. Starlight’s programs have been proven to distract children from their pain, help them better understand and manage their illnesses, and connect families facing similar challenges so that no one feels alone.

Through a network of chapters and offices, Starlight provides ongoing support to children, parents and siblings in all U.S. states and Canadian provinces with an array of outpatient, hospital-based and Web offerings. Programs are also delivered internationally through affiliates in Australia, Japan and the United Kingdom.

Getting a Job is a Lot Easier, if You Don’t Limit Yourself to One Industry
TeamF1 and Cavium Networks’ Technologies Power NETGEAR ProSafe FVS318G VPN Firewall