You are here: Home › eDemocracy 2.0 Comes to Canada – ElectionMall CEO Discusses How Technology is Changing Politics Worldwide
By Send2Press Newswire on November 4, 2009 in Elections and Politics, Press Releases 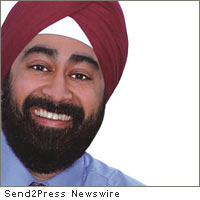 TORONTO, Canada, and Washington, D.C. (SEND2PRESS NEWSWIRE) — Ravi Singh, CEO and founder of ElectionMall Technologies (www.electionmall.com), is scheduled to speak at the 10th annual Art and Science of Public Affairs conference, sponsored by the Public Affairs Association of Canada. ElectionMall Technologies is a campaign technology company that is dedicated to helping campaigns of all sizes utilize technology and reach voters since 2000. Singh is recognized as the “Campaign Guru,” a global expert on campaign technology.

Singh will be speaking on U.S. politics Thursday morning, focusing on the political sphere after Obama’s campaign, and if these changes can be applied to Canada’s political climate. Currently over 83 percent of the population of Canada is using the internet, according to International Telecommunication Union (ITU).

Currently, several social networking outlets exist for politicians in Canada, but few are taking advantage of them. Twitter has less than 100 Canadian politicians using the site, whereas the United States has an entire separate Twitter location for all the members of Congress. MySpace has created an “Impact Canada” site that allows political parties to answer voters’ questions, but currently only the Liberal Party has joined the site. Additionally, only two prominent Canadian politicians had used MySpace to reach voters as of 2008.

Ravi Singh plans on explaining why Obama’s use of the Internet, notably social networking tools such as Facebook and MyBarackObama, had such an impact on the election results. Mr. Singh hopes to empower the Canadian politicians, helping them better utilize existing tools to reach constituents.

“I hope this information will be a catalyst to the Canadian population and help them reach a new level of democracy within their political system,” states Singh.

The 10th annual Art and Science of Public Affairs conference will be occurring November 4-5 at the Toronto Board of Trade. For information on attending Mr. Singh’s speech, please contact Bernie Morton at Bmmorton@sussex-strategy.com or directly at 416-644-4756. To set up a phone interview with Ravi Singh, please contact Liz at 202-468-5955 for scheduling.

Established in 1999, ElectionMall.com is a non-partisan world leader in providing on demand (SaaS) Internet-based solutions for campaigns and elections worldwide, effectively utilizing technology and business know how to enable candidates, advocacy groups, and nonprofits to generate enhanced gains in awareness, funds, and votes. ElectionMall has 2 registered international patents. ElectionMall has identified over 54 different campaign behaviors and has categorized them into five specific product offerings, including: Build, Manage, Raise, Promote and Shop, creating a one-stop-shop that encompasses the entire life-cycle of a campaign. ElectionMall is headquartered in Washington, D.C., Chicago and L.A. with international offices in Brussels, Belgium and Mexico City, Mexico.

Foreclosure Prices Were Up, While Real Estate Prices Were Down
Migrate to Windows 7 Safely Now, with No More Worry