You are here: Home › Cookbook Challenges ‘Good Taste’ in Defense of Free Speech and International Rights
By Send2Press Newswire on November 5, 2009 in Books and Publishing, Press Releases 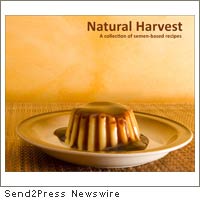 SAN FRANCISCO, Calif. (SEND2PRESS NEWSWIRE) — If you have never heard of “Natural Harvest,” the only semen-based cookbook currently on the market, you are not alone. Despite international media attention, “Natural Harvest” (ISBN: 9781424314614) has managed to stay under the mainstream radar – but just barely. That may be about to change with a nomination for the Gourmand World Cookbook Award, a prestigious international recognition of exceptional and groundbreaking culinary literature.

What started as a dinner party discussion among friends was eventually transformed into a glossy full color cookbook; one that has become one of the most popular items available from internet publisher Lulu.com at over 2 million unique visitors since its release. With over 1,500 books sold, copies of “Natural Harvest” have made their way across the world, from Italian translators to a women’s book club in Singapore; even to Saudi Arabia, where a copy was shipped incognito directly from the author to evade government censors. The book has been particularly popular in Canada and France where journalists and independent media have tracked its success with fascination.

Independent and user-driven media has had a field day with “Natural Harvest.” Photenhauer himself has given over 20 radio and news interviews with bloggers and journalists around the world. Comments on blogs and media sites run the gamut from humor to disgust to genuine appreciation. Often they are intertwined with thoughtful debates about the importance of free speech and the need for tolerance in modern and diverse societies. That the internet has made this discussion international has only emphasized the significance of the argument: an emphasis that will be on display at next year’s Paris Cookbook fair, where the Gourmand World Cookbook Awards are presented, with their focus on international rights.

The popularity of the cookbook has surprised many people, including its author, Paul Photenhauer, a longtime resident of San Francisco, California and self proclaimed “foodie.”

“I have received countless emails from people who thought they were alone in cooking with semen, but were relieved and happy to discover not only a cookbook, but a growing community of culinary enthusiasts,” Photenhauer explains. A third edition is already in the works, with new and improved recipes submitted by fans of the cookbook.