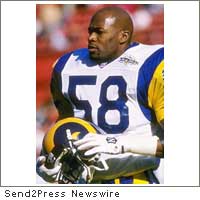 In recent days, NFL injuries and the “safety” epidemic have caught the attention of Congress, the media, and the nation at large, with outlets such as 60 Minutes, the New York Times, and New Yorker Magazine devoting intensive coverage to the controversial congressional hearings attacking the NFL for its negligence towards its star employees.

Roman Phifer, three-time Super Bowl Champion and Assistant Coach for the Denver Broncos, and his business partners Rico McClinton and Joe Ruggiero, produced BLOOD EQUITY, a hard-hitting film that focuses on the issues facing former NFL Players following their retirement, including their ironic struggle against the NFL Player’s Union and the team owners they made rich.

The film will be released on DVD and Blu-ray December 1st, 2009, and is already available to pre-order on Amazon, Netflix, Facebook, and many others. It will debut on iTunes and Hulu shortly thereafter.

Find us on Facebook and Become a Fan of BLOOD EQUITY:
www.facebook.com/pages/Beverly-Hills-CA/Blood-Equity/168698562726 .