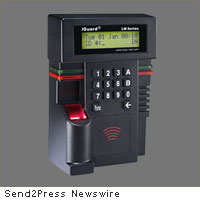 The iGuard provides physical access control as well as time clock and labor attendance functions as a stand-alone or multiple door “plug and play” device. The iGuard uses SecuGen’s fingerprint biometric technologies to authenticate registered users. It also incorporates Mifare(R) smart card technology, easy to use embedded administrative software and web server and is capable of networking via standard LAN or the Internet.

The SecuGen SDA03M is very rugged, accurate, and affordable as it is designed for long-lasting performance in high traffic and tough environments.

“Lucky Technology has deployed earlier generations of the iGuard with the United States Air Force and the US Army and in Afghanistan and thousands of schools, universities and business buildings worldwide,” stated Wayne Wilkerson, President of Lucky Technology’s US Operations. According to Wilkerson, “The Company had a need to incorporate SecuGen’s high quality sensor for applications that address the most demanding physical access environments in which our iGuard units are installed.”

SecuGen’s OEM sensors are used by device manufacturers all over the world and are widely recognized as among the most effective and affordable solutions for successfully integrating fingerprint capture and matching into third party devices.

Jeff Brown, VP of Sales for SecuGen stated, “We are very pleased to have been selected by Lucky Technology for inclusion into their iGuard product line. Lucky has proven to be expert at designing and manufacturing access control readers that are low cost but highly functional.”

Won Lee, SecuGen’s CEO added, “We are excited about our partnership with Lucky Technology. The market for biometrics in Asia is large and rapidly growing. We are delighted to be partnering with one of the premiere biometric device manufacturer’s in that region.”

Lucky Technology was founded in early 1999 with its embedded Web server, plug and play Internet device called iGuard. Aimed at the access control and time attendance market, iGuard has become the product of choice for thousands of applications where web connectivity with ease of deployment is a major advantage. Based in Kowloon, Hong Kong with a growing world presence, the Company has US headquarters located in Satellite Beach, Florida with strategic distribution partners in Freeland, Washington, Chicago, Illinois and Titusville, Florida.

SecuGen Corporation (www.secugen.com) is the world’s leading provider of advanced, optical fingerprint recognition technology, products, tools and platforms for physical and information security. SecuGen designs and develops FBI-certified fingerprint readers and OEM components, developer kits and software, including NIST/MINEX-compliant algorithms. Known for high quality, ruggedness, and performance in a wide variety of applications and environmental conditions, SecuGen products are used by world-leading financial, medical, government, educational and corporate institutions and are sold through a partner network of over 200 original equipment manufacturers, independent software vendors and system integrators around the world.

News Source: SecuGen Corporation :: This press release was issued by Send2Press® and is Copyright © 2009 Neotrope® News Network – all rights reserved.

Former Georgia Gov. Barnes Will Speak to Georgia Brokers on Jobs, Business
‘Party Line’ is Certain to Excite the Literary World, May Also Touch the Very Dreams of its Readers