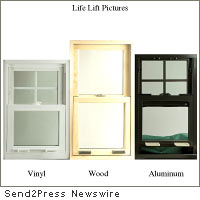 DALLAS, Texas (SEND2PRESS NEWSWIRE) — Annually, the United States Fire Administration reports that 3,000 to 5,000 people die in fires. This figure includes 800 children, nine and younger, and 1,200 seniors. One fire captain, owner of Hand2Live, has set out to alter those statistics. Career firefighter, Captain Greg Lawler, knows that many children and the elderly often experience difficulty opening windows. And, with only three minutes to escape a flaming house fire, everyone must be prepared to quickly make the correct escape decision through viable exits.

Several years ago, Captain Lawler discovered this problem first hand. During a home fire drill, he learned that his 6-year old daughter, Olivia, could not open her bedroom window – one of two ways out.

The drill took place in the middle of the night – the most vulnerable time. They reviewed the drill once and began. The first drill was successful. Olivia rolled to the floor and was advised that conditions were acceptable for using the front door.

But, the next drill did not go as well. When told that conditions were not acceptable at the front door, Olivia was directed to use the window, but struggled. In a real-life situation, the clock ticks and the fire consumes the home with each passing second.

Lawler called to Hannah, Olivia’s older sister, to help her open the window. However, what if Hannah was not there in a real-life situation?

Most fire fatalities occur at night and victims are usually found near the front door, in a bathroom or a bedroom. And, while the window is taught as a second way out, in many situations, it may quickly become the first.

So, what was the problem? Olivia found difficulty with the locks and was unable to grasp the ledge with her small fingers. After teaching fire safety courses, Lawler soon realized that Olivia was not alone in her challenge.

After examining the problem, Lawler discovered that window manufacturers have varied maximum allowable opening forces; all windows he tried were different. In addition, other factors such as excessive moisture, dirt and grime and shifting foundations also contribute to difficult opening.

“The bottom line is that everyone should be able to open all the windows,” Lawler adds.

And so, Hand2Live was born. Named after Lawler’s daughters, Hand2Live has patented a device that attaches to the sash lift or ledge of any window. It’s a durable, non-permanent and fully-graspable aluminum handle that helps people lift the window. Handles for wood windows without a sash lift or ledge are also available.

So, with two ways out, why does America have the fifth highest reported fire death rate? Perhaps, like doors, windows should have handles too.

Captain Lawler recalls an early morning fire where a child was unable to get out and his father, in desperation, broke the window with his fist and was able to rescue his son. As a result, the child suffered burns and lacerations from being pulled through the broken window, but recovered.

“Breaking a window is dangerous, difficult and not the best option,” Lawler says.

For more information about Hand2Live and to view a product demo video, visit: www.Hand2Live.com .

News Source: Hand2Live :: This press release was issued by Send2Press® and is Copyright © 2009 Neotrope® News Network – all rights reserved.

‘Party Line’ is Certain to Excite the Literary World, May Also Touch the Very Dreams of its Readers
Effective Ways to Reduce Business Travel Costs