You are here: Home › ‘The Unbearable Sadness of Zilch’ by Konrad Ventana: New Novel Investigates the Loss of Beauty and Inspiration in Hollywood Neo-noir
By Send2Press Newswire on November 16, 2009 in Books and Publishing, California, LOS ANGELES, Calif., Press Releases 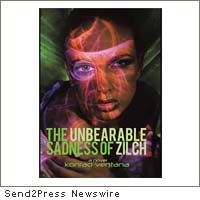 LOS ANGELES, Calif. (SEND2PRESS NEWSWIRE) — From the very first page, to the final departing scene, “The Unbearable Sadness of Zilch” (ISBN: 9781440158261) by Konrad Ventana is a riveting narrative that shines a detective’s flashlight into the darkest of reaches of the human mind. Only this time it is not the usual hard-boiled Private Detective who is called upon to find some hidden Truth, it is the philosophical practitioner or “Perspicuous Eye” who is called upon to find the lost Beauty. In this latest book release, Ventana takes the reader behind the curtains into the fabulous theatrical world of Hollywood’s most accomplished movie moguls, who are striving to embrace the ultimate sources of their creativity, while they struggle with their own psychological demons.

Not since Nathanael West’s The Day of the Locust and F. Scott Fitzgerald’s The Last Tycoon has Hollywood and the motion picture industry been seen in such a bold and illuminating light. Brimming with sexual intrigue, eye-widening spectacle, and a host of recognizable characters, this latest release by Konrad Ventana sets a new standard of relevance and transcendence in postmodern literary fiction as it raises the bar for visual special effects (VFX). A must-read anyone who loves Hollywood stories, mystery novels, and classic literature, although the ultra-contemporary setting of this astounding new novel feels like it all happened just yesterday.

A compelling work of social criticism, The Unbearable Sadness of Zilch is a treatise on existentialism, modernism, and the emergence of a radical new brand of feminism: the feminist provocateur. Set in Hollywood Neo-noir, and guided by an intrepid philosophical counselor (or life coach), we investigate The Lost Love of the Latest Tycoon, examining the role of the muse, the magnificent intemperate impulses of the femme fatale, and the allure of the casting couch, as we witness the fall of an empire in the twilight of the egoists. Blazing with eye-opening drama, keen psychological and insights, and layers of literary pyrotechnics, not to mention VFX, the reader is at once awed and entertained by this post-lux piece de resistance.

Using the pseudonym Konrad Ventana, literally “Bold Counsel through a Window,” the author looks behind the scenes at the ideologies of our modern times and examines the potential for future development. This is the second book of The Post-Lux Trilogy (on artistic creativity), the first of which received Editors Choice and Rising Star awards.

News Source: Konrad Ventana :: This press release was issued by Send2Press® and is Copyright © 2009 Neotrope® News Network – all rights reserved.