You are here: Home › New Book Exonerates Thomas Jefferson in DNA Controversy over Slaves and Sally Hemings
By Send2Press Newswire on November 19, 2009 in Books and Publishing, Press Releases 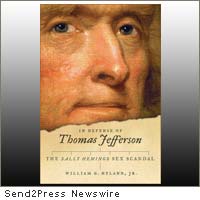 TAMPA, Fla. (SEND2PRESS NEWSWIRE) — “In Defense Of Thomas Jefferson” (ISBN: 978-0-312-56100-0), has just been published by St. Martins Press and concerns the major historical controversy surrounding Mr. Jefferson and his slave, Sally Hemings. “In Defense” definitively destroys the cultural myth that Jefferson had any relationship with Ms. Hemings.

The belief that Thomas Jefferson had an affair and fathered a child (or children) with slave Sally Hemings — and that such an allegation was proven by DNA testing — has become so pervasive in American popular culture that it is not only widely accepted but taught to students as historical fact. In this startling and revelatory argument, William G. Hyland Jr. shows not only that the evidence against Jefferson is lacking, but that in fact he is entirely innocent of the charge of having sexual relations with Hemings.

A “thorough survey of the scholarly and scientific literature … Mr. Hyland, a lawyer, presents the historical record carefully and, closer to our day, provides marvelous details of the scholarly empire-building and grantsmanship that go into making ‘fact’ out of limited evidence — in this case and others. By the end of ‘In Defense of Thomas Jefferson,’ it is hard not to conclude that, given the revisionist impulses of American historians today, Jefferson should have put pen to paper after all,” says Thomas Lipscomb, The Wall Street Journal.

More information about the author: www.williamhylandjr.com .