You are here: Home › Social Networking Websites Becoming the New Voice for European Politics
By Send2Press Newswire on November 19, 2009 in Elections and Politics, Press Releases 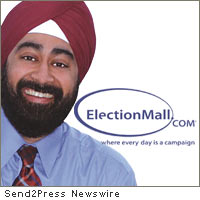 BARCELONA, Spain (SEND2PRESS NEWSWIRE) — In conjunction with the launch of ElectionMall’s new ElectionMall.EU website, Ravi Singh, CEO of ElectionMall Technologies, will be speaking in Barcelona, Spain at the first ever European conference held by the Personal Democracy Forum. For the last six years, the Personal Democracy Forum has served as a hub for American politicos, government enthusiasts, and technology fans to gather and share information on the Internet and how it is changing the American political landscape.

The Personal Democracy Forum has recognized the growing interest among European politicians to create a more transparent and engaging political process, one of the side effects of Barack Obama’s campaign in 2008. Ravi Singh will be focusing his speech on Social Networking sites, and how these are an effective tool for expanding participation for all politicians and voters

At this event, ElectionMall will re-launch http://www.ElectionMall.eu – its new website dedicated to tailoring technology to European political and cultural behaviors. Currently, 76 percent of European Internet users are utilizing social networking sites, and there is a high internet penetration in most countries.

“The first ever PDF conference to be held in Europe is an ideal venue for the re-launch of ElectionMall.EU,” stated Singh. “I could not be more excited about sharing our best practices with the European market and helping them start their own political Internet revolution.”

ElectionMall has decided to re-release its new website after the company received numerous requests from European politicians for insights on utilizing the Internet for their campaigns. Previously, the company has worked with several members of the EU Parliament, using its Brussels office as an ElectionMall Europe headquarters. The Brussels office stands as a division of ElectionMall’s international franchises, such as the offices in Mexico City, in addition to newly opened offices in Ukraine and Malaysia.

“The EU has a lot of potential for growth in this area. ElectionMall has recognized it, and now so has PDF, and I’m happy to just be a part of it,” comments Singh.

Established in 1999, ElectionMall.com is a non-partisan world leader in providing on demand (SaaS) Internet-based solutions for campaigns and elections worldwide, effectively utilizing technology and business know how to enable candidates, advocacy groups, and nonprofits to generate enhanced gains in awareness, funds, and votes. ElectionMall has 2 registered international patents. ElectionMall has identified over 54 different campaign behaviors and has categorized them into 5 specific product offerings, including: Build, Manage, Raise, Promote and Shop, creating a one-stop-shop that encompasses the entire life-cycle of a campaign. ElectionMall is headquartered in Washington, D.C., Chicago and L.A. with international offices in Brussels, Belgium and Mexico City, Mexico.

News Source: ElectionMall Technologies :: This press release was issued by Send2Press® and is Copyright © 2009 Neotrope® News Network – all rights reserved.