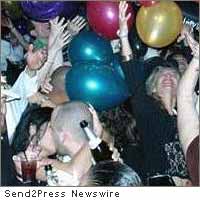 “These New Year’s Eve parties are really unique,” says Phil Seyer, director of Professionals Guild. “The entire first floor of each hotel is entirely devoted to the party. There’s no other elegant, huge New Year’s Eve event in the area that puts singles at such ease. Couples are also welcome, and many couples tell us they really enjoy these events ‘because singles know how to party!'”

Both New Year’s Eve parties include: two free drinks, free casino gaming for prizes, a live dance band and a DJs. Special entertainment is provided throughout the evening and culminates in a champagne toast, party favors and continued mingling and dancing.

The bands and DJs will play in separate grand ballrooms. This allows party guests different experiences as they go from room to room. Bands will play an array of music ranging from top 80’s and 90’s hits to current dance music. The DJs will play popular tunes from several decades, including old-school favorites as well as the latest dance tunes. There is something for everybody.

Party goers can also visit various exhibits and try their hand at casino gaming. At the Hilton Concord New Years Eve party craps, blackjack, roulette and poker will be the games of choice, with prizes awarded to the best players. At the Sacramento NYE celebration, craps and blackjack will be offered.

Professional photographers will be on hand at both locations and ready to print out photos on the spot.

Advance tickets are available at the hotel for $75 or $65 at www.ProGuildSocial.com . Tickets at the door are $85.

ProGuildSocial is sponsoring a contest and giving away two NYE related prizes. One prize is for a free room and New Years Eve party at the Hilton Concord. The other prize is a New Years Eve party and complimentary room at the Hilton Arden West. To enter the contest one need only join the ProGuildSocial network and invite friends to join as well. There is no cost to become a member of ProGuildSocial. ProGuildSocial also sponsors a variety of other social events during the year, for example, Valentines theme parties, Halloween parties, castle wine hikes, dance parties at the Golden Gate Yacht Club and Bay cruises. But the New Years Party is the party of the year.

News Source: Professionals Guild :: This press release was issued by Send2Press® and is Copyright © 2009 Neotrope® News Network – all rights reserved.