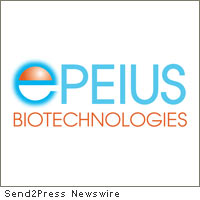 SAN MARINO, Calif. (SEND2PRESS NEWSWIRE) — Epeius Biotechnologies Corporation, an emerging leader in the field of targeted genetic medicine, gained international validation of the cutting-edge science behind its lead oncology product, Rexin-G, when scientists around the world rediscovered the Cyclin G1 gene to be a major locus of cancer pathogenesis and disease progression, and thus a prime target for anti-cancer therapies. Recently, scientists at the NIH National Cancer Institute investigating the role of microRNAs (miRNAs) in tumor development and their utility to serve as biomarkers for cancer diagnosis and prognosis identified one particular species of miRNA (designated miR-122) that was linked to both the development and the aggressiveness of liver cancer (Coulouran et al., Oncogene, 2009).

While microRNAs are natural negative regulators of protein coding genes, miR-122 is characteristically suppressed in hepatocelluar carcinomas, and conversely its “therapeutic” re-expression was found to reverse the tumorigenic properties of the cancer cells in terms of growth, replication potential, invasion, and tumor formation (Bai et al., J Biol Chem, 2009). Scientists working in Italy and the USA, using miRNA libraries as probes in high throughput microarray assays to screen for sequences that are dysregulated in human cancers, independently implicated miR-122 in the pathogenesis of liver cancer and further demonstrated that the tumor suppressive action of this particular mRNA is manifested through the inhibition of the Cyclin G1 gene (Gramantieri et al., Cancer Res, 2009).

The finding that the natural suppression of the Cyclin G1 gene is lost in cancer cells is not at all surprising to scientists at Epeius Biotechnologies, who first identified the human Cyclin G1 gene as a proto-oncogene in 1994, demonstrated its therapeutic potential in a comprehensive series of landmark studies (1995-2005), and designed the sophisticated dominant-negative “knockout” construct embodied in the powerful anti-cancer agent Rexin-G (see Gordon and Hall, Intl. J. Oncology, 2009).

According to Dr. Frederick L. Hall, President and CEO of Epeius Biotech, “It is gratifying to find that functional genomics and high-throughput screening have finally served to direct basic research away from simplistic antibodies and superficial blockades of receptor-mediated pathways to the crux of the matter and the final common pathways of cell cycle control. Moreover, it is always reassuring when a basic mechanistic understanding of the logic and executive enzymology of a biochemical pathway serves to trump the rolling of dice.”

The finding that miR-122 targets Cyclin G1 gene expression confirms that Rexin-G may indeed be restoring a natural tumor suppressor function that is lost in the development and progression of many types of cancer; while the pathotropic (or disease-seeking) properties of Rexin-G function to deliver this agreeably rational and strategic anti-cancer agent precisely where it is needed most.

Epeius Biotechnologies Corporation is a privately held biopharmaceutical company dedicated to the advancement of genetic medicine with the development and commercialization of its leading oncology products and its tumor-targeted gene delivery systems. Rexin-G(R), a tumor-targeted anti-cancer agent that is approved for use against all solid tumors by the Philippine FDA, and has recently received three Orphan Drug priorities and Fast Track designation by the U.S. FDA.

Please visit us at http://www.epeiusbiotech.com .