You are here: Home › Publishers Newswire Announces its Latest List of ‘Books to Bookmark’ for Q4 2009
By Send2Press Newswire on December 30, 2009 in Books and Publishing, Press Releases 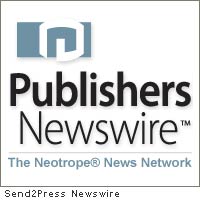 REDONDO BEACH, Calif. (SEND2PRESS NEWSWIRE) — Publishers Newswire (PNW), an online resource established in 2004 for small publishers, as well as lesser known and first-time book authors, has announced its latest semi-annual “Books to Bookmark” list, for the fourth quarter of 2009. This list is a round-up of new and interesting books (and e-books) which are often missed due to not originating from major New York book publishing houses, or “big name” authors.

“Even with the slower economy, ardent authors and small publishers continue to give voice to their muse in print,” said PNW editor Christopher Laird Simmons. “And, thanks to breakout products like Amazon’s Kindle, e-book versions – which were a gimmick a few years ago – are swiftly becoming ubiquitous.” Simmons has been a working journalist for 25 years, and has written widely on the topic of publishing, marketing, and e-books.

The following list of books are provided as “worth a look” for media and booksellers, as well as avid readers of new and unique literary content. To learn more about these and other books, in detail, visit: http://www.publishersnewswire.com .

• Rock Star’s Rainbow – They Threw Him Out A Plane, But They Couldn’t Throw Out His Story

“Rock Star’s Rainbow,” by author Kevin Glavin (ISBN-13: 978-0982546604, Kevin Glavin Publishing, 500 pp., paperback), is a new novel chronicling a recent and mysterious scandal involving one of the nation’s most cherished “icons.” The far-fetched story begins in August 2009, when a renowned entertainment reporter is thrown out of a plane over Los Angeles. At the time of his unfortunate death, he was completing a manuscript detailing the strange personal life of the most secretive mega star of our time – “Rook.” The quixotic adventure journeys from L.A. to Amsterdam, to India, and back. Along the way, Rook struggles with celebrity excess, re-ignites with his old flame, gets mixed up with the mafia, and must rescue the daughter he never knew he had. From the heights of hedonism to the depths of despair, this topical parody explores the “beast of fame.”

The media is saturated with real-life accounts of financial scoundrels such as Madoff, Sanford, and Rothstein making people sadly aware of men who strive to cheat their clients through alleged criminal schemes and outright theft. Such is the story line of husband and wife co-authors Ken and Tammy Brown’s “Falling Apart” (ISBN-13: 978-1605943954, Llumina Press, 224 pp., paperback; also available in hardcover). However, the man in this book is innocent. Set in today’s world of financial disintegration, “Falling Apart” is a timely book that depicts the horrors one man faces as his life crumbles to dust and ashes.

A Step Beyond Publishing announces its first non-fiction, and potentially controversial book: “I Apologize to All Women in the World – From Man” (ISBN-13: 978-0979972409). The author, Billy Prowell, inspires women to accept their roles as dignified creations of God and to reject the assumed role, imposed by men, of indentured servant. This new book provides readers with a process to heal and inspires the wounded to rebuild their lives without harboring hatred in their hearts. Through thought-provoking letters and 11 different relationship examples, readers will gain insight into the egotistic behaviors of men and the gullibility of women.

In this startling and revelatory new book, William G. Hyland Jr. shows not only that the evidence against Jefferson is lacking, but that in fact he is entirely innocent of the charge of having sexual relations with Hemings. “In Defense Of Thomas Jefferson: The Sally Hemings Sex Scandal” (ISBN-13: 978-0312561000, Thomas Dunne Books, 320 pp., hardcover; also in Kindle edition – ASIN: B002UL3392), has just been published by St. Martins Press and concerns the major historical controversy surrounding Mr. Jefferson and his slave, Sally Hemings. “In Defense” claims to definitively destroy the cultural myth that Jefferson had any relationship with Ms. Hemings.

• ‘Party Line’ May Touch the Very Dreams of its Readers

Sageous Press has announced the release of “Party Line” (ISBN-13: 978-0578035932, Sageous Press, 328 pp., paperback). a new novel by Peter A. Luber. This, Luber’s second foray into the realm of dreams, establishes a unique vision which serves not only to entertain but to enlighten the reader as to the depths of his or her own consciousness. His first work, “Oneironauticus,” was published in 2008 by Sageous. The narrative of “Party Line” consists of the dreams of seven troubled, doomed, or inspired individuals. Each dreamer’s personality and experience form both the content and style of their respective chapters. This creates a reading environment that truly portrays, rather than simply describes, the nocturnes and relationships of the major characters.

No one is innocent … not in this town. In this town, the apocalypse has come and gone, lifting the veil of innocence like a great velvet curtain in an old movie house, where the only victims that don’t return for the sequel are the gods themselves, struck out long ago by the big blue pencil. In this town, every man, woman, and child takes the limits of his or her own field of vision to be the limits of the world. In his latest novel, “The Unbearable Sadness of Zilch” (ISBN-13: 978-1440158261, iUniverse, 160pp., hardcover; also available in paperback), Konrad Ventana explodes the myths behind the so-called Star Machine with a whole new level of intimate private investigation.

A new booklet by author, motivational speaker, and business expert Marty Niedelman, “Rx For Success” (no ISBN), is a clear concise manuscript to help anyone achieve their goals and aspirations. Many people work hard and struggle to survive. Others do things in a certain way and have all the wealth and fame. Marty has combined the knowledge of many motivational books, tapes, courses, and lectures. He feels in essence, everyone is saying the same thing in different ways. By reading his booklet in thirty minutes or less, people will reap the benefit of reading many books which could amount to thousands of pages. Available in eBook and print editions.

Almost for sure, you or a family member will need expensive long term care someday. How will you pay for it? What public or private insurance options are available to you? Now you can get those through “Dignity for Life: Five Things You Should Know Before Considering Long Term Care Insurance” (ISBN-13: 978-0615142531; also Kindle Edition – ASIN: B0030GFC4K) by Cameron Truesdell, CEO of LTC Financial Partners, LLC (LTCFP), one of America’s most experienced long term care insurance agencies. The latest edition is also available for iPhone, using the Kindle for iPhone App.

News Source: Publishers Newswire :: This press release was issued by Send2Press® and is Copyright © 2009 Neotrope® News Network – all rights reserved.