You are here: Home › Dr. Robert Hoyk, Author of ‘The Ethical Executive’ is Expert Source to Understand ‘Why’ of Scandals
By Send2Press Newswire on January 4, 2010 in Books and Publishing, Press Releases 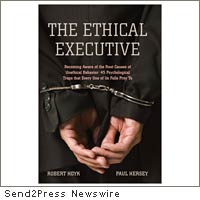 LAGUNA BEACH, Calif. (SEND2PRESS NEWSWIRE) — Hardly a week goes by without some sort of unethical behavior making national headlines. Whether it is a media hoax about a boy in a balloon or a Ponzi scheme of the highest caliber, unethical behavior has – sadly – become expected?? Dr. Robert Hoyk, is a Clinical Psychologist and primary author of “THE ETHICAL EXECUTIVE: Becoming Aware of the Root Causes of Unethical Behavior: 45 Psychological Traps that Every One of Us Falls Prey To” (Stanford University Press; ISBN: 978-0804759656, hardcover). Hoyk analyzes treacherous situations from Enron to Jonestown and personal scenarios throughout “The Ethical Executive.” He is a remarkable source to help others understand the “Why” of these dilemmas and any new ones that are likely to present themselves. Hoyk’s analysis of the recent indictment of Raj Rajaratnam for insider trading explains this further:

Rajaratnam founded the Galleon Group in 1997. Galleon became a success when its analysts were privy to early, selective market information such as corporate earnings. With the new Regulation Fair Disclosure rules of 2000, Galleon could no longer obtain selective market information legally. But getting the banned information remained a prime tactic of Galleon. And pressure was severe on traders to get it. Traders who didn’t make the grade were rebuked or fired.

It’s likely that Galleon was caught in five psychological traps:

Trap 13: “Don’t Make Waves”: Galleon became a success by obtaining early, selective market information. This strategy became a norm of the company and like an automatic pilot led Galleon down the path of corruption.

Trap 11: Conformity: Traders who were against the insider trading or newly hired traders were likely to follow what the group was doing.

Trap 12: Conformity Pressure: Traders who didn’t follow the norm or what the group was doing were rebuked or fired.

Trap 24: Desensitization: The more Rajaratnam and his traders committed insider trading the more their guilt decreased. Over time, with repeated exposure, people emotionally habituate to any type of distress-including guilt. You commit a transgression once, it engenders guilt; you commit the transgression again and again, your guilt is deadened.

Trap 37: Doing Is Believing: Frequently, we observe our own behavior. In so doing, we influence our attitudes about our actions. If we choose to act unethically, the act itself will shape our beliefs and attitudes about our transgression. To some degree we will begin to see the transgression as more acceptable. As Rajaratnam and his traders committed alleged insider trading they automatically began to view their transgressions in a less negative way.