You are here: Home › Libya Spotlight: Libya’s Magnificent Roman and Greek Heritage
By Send2Press Newswire on January 19, 2010 in Press Releases, Travel and Tourism 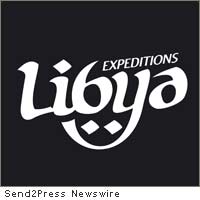 Remarkably well-preserved by the desert sands, the unspoiled Roman ruins of Leptis Magna and Sabratha (both UNESCO World Heritage Sites) are arguably Libya’s biggest tourist attractions and a magnet for the cultural traveler. Leptis Magna, whose presence and scale rival anything in Rome, has been praised as “the most beautiful Roman city in the world.”

“Leptis Magna is the finest example of an intact Roman city in the world, and the highlight of any tour to Libya,” says Ryad Sunusi, Founder and CEO of Libya Expeditions. “Whether a history buff or a casual visitor, you will be mesmerized by the majesty of the Roman ruins in Libya.”

“Libya Explorer: Romans and Berbers” is a breathtaking look at the Roman Empire in North Africa and the mysterious Berbers who warred with the might of Rome from their mountain redoubts and desert strongholds. The massive ruins of Leptis Magna, birthplace of the Emperor Septimius Severus, are extensively explored with a look at the Forum, Marketplace, Hadrianic Baths, and Theater. The tour stops by Sabratha, smaller cousin of Leptis Magna, then ventures into the Berber heartland through stunning scenery and unique Berber architecture and ghurfas; before finally arriving at the renowned Saharan town of Ghadames, the “Pearl of the Desert.”

“Libya Unveiled: Tripolitania, Cyrenaica, and Fezzan” includes the Roman and Berber attractions of Libya Explorer and ventures further East to the Hellenic ruins of Cyrene and Appollonia, and the mythical Pentapolis; all set amidst a breathtaking landscape of rolling hills and lush valleys and the soothing backdrop of the Mediterranean.

Libya’s location in the middle of the Mediterranean and the proximity of its classical attractions to its two major cities, Tripoli and Benghazi, make Libya a very popular Mediterranean cruise stopover, as well as a popular school and educational destination.

Libya Expeditions is a full-service Libya tour operator that provides comprehensive Libya travel services, focusing on escorted Libya cultural, archaeological, and desert adventure tours and holidays; and has rapidly become the leading operator of escorted tours to Libya. Libya Expeditions is committed to promoting responsible tourism – supporting the local Libyan economy whilst retaining respect for traditional customs and way of life. As a 100 percent Libyan-owned company, we employ local drivers and guides who are part of their traditional community, thus providing a sustainable income whilst protecting an established way of life.

For more information on our Libya tour packages and itineraries, and to make a reservation, please visit www.libyaexpeditions.com .