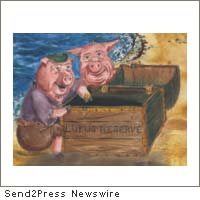 BOSTON, Mass. (SEND2PRESS NEWSWIRE) — Smoked Goldeye Press today announced the release of a children’s picture book that aims to explain how new money from the Federal Reserve inadvertently causes cycles of economic downturns in the United States economy — something embattled Fed chairman Ben Bernanke would rather people not know about, says the author. In 32 color illustrated pages “The Scary Story of the Three Little Pigs and the Big Bad Box of Free Money” (ISBN: 9780615337432) attempts to simplify the complexity of central bank monetary policy in an amusing way and is targeted at readers aged 10 to 100.

“The ‘Scary Story’ makes for a fun, understandable way of telling an important story about the harm that can be done by central banks,” said Walter E. Williams, Professor of Economics at George Mason University.

The book has also received approval from other prominent economists from Massachusetts to Louisiana and Alabama’s Ludwig von Mises Institute. “I was inspired to write this book for my 11 and 13-year-old kids to help them understand why so many people have lost their jobs,” says author Martin McCannell who is the founder and president of a three-employee medical device company in Boston.

“The approval I received after showing my story to a few economists, to make sure I got it right, made me decide to go ahead with this book project. It’s a simple concept that everyone can understand once they read a little story like this,” McCannell predicts.

South Dakota artist Sharon Grey won a worldwide competition to illustrate the book with her watercolor paintings. This is her fourth children’s book.