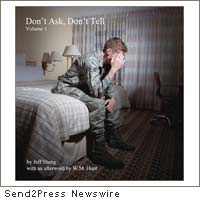 Sheng’s photographs show actual members of the military in various locations around the US, using lighting and shadow effects to mask part or all of his subjects’ faces. The dramatic collection of portraits, recently highlighted in the Los Angeles Times, includes e-mails from servicemen and servicewomen detailing both their service for their country and how the “don’t ask, don’t tell” policy affects them.

“After looking at all of the print-on-demand fine art book companies, I chose A&I because of their attention to color and detail, and their history of meeting art photographer’s high standards for their publications,” said Jeff Sheng, a professional photographer who also teaches at the University of California, Santa Barbara. “It was important for me to be able to meet directly with those printing and handling my book, and there was an added benefit of having everything done in-house, near my studio in Los Angeles. The resulting book that A&I printed is exquisite, with color density, quality of paper, and overall construction far surpassing other print-on-demand books that I had seen from other companies.”

“Jeff Sheng’s work takes us to the heart of the issue and we’re proud to be working with him on this important book,” said A&I co-owner Baret Lepejian. “Don’t Ask Don’t Tell really shows how short-run, print-on-demand technology is powering the self-publishing movement, playing a powerful role in our democratic process by giving artists the freedom to create their own special books with complete control over content and quality.”

A&I’s legacy of providing high-end photographic services to the world’s top photographers highlights the L.A.-based company as one of the last professional traditional film processors in the country. Now with two HP Indigo presses in its Hollywood plant, A&I Books has expanded its business into digital book production, printing fine-art editions for such noted photographers as Herman Leonard, Melvin Sokolsky, and Joel Meyerowitz. The on-site 1,200 sq. ft. A&I Gallery (www.aandi.com/gallery) has featured more than 150 photographers in solo and group exhibitions benefiting non-profits such as Amnesty International, Homeboy Industries, and Kickstart Intl., among others, sponsored by Hewlett-Packard.

Jeff Sheng (www.jeffsheng.com) is an artist based in Los Angeles, California. His photographs have been published in the New York Times Magazine, the Los Angeles Times, the Boston Globe, Time Magazine, OUT Magazine and the Advocate. His photographic series “Fearless,” has been exhibited at over 40 different venues during the past three years including at the 2009 LGBT Human Rights Conference in Copenhagen, Denmark, and ESPN Headquarters in the United States, and in 2008 was featured as a segment for the ABC World News with Charles Gibson. Jeff was recently awarded a grant by the St. Paul’s Hospital Foundation in British Columbia to expand “Fearless” into Canada, and the series, now with over a hundred LGBT high school and college athletes from the United States, is on view at Pride House in Whistler, BC during the 2010 Winter Olympics.

News Source: AandI Books :: This press release was issued by Send2Press® and is Copyright © 2010 Neotrope® News Network – all rights reserved.