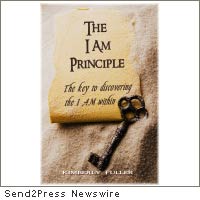 LAKELAND, Fla. (SEND2PRESS NEWSWIRE) — A new book, “The I AM Principle” (ISBN 1448605946; Good Gets Better Publishing), takes a controversial look at the 2,500 year old translation of the Old Testament, from which the text of most modern Bibles is derived. Author Kimberly Fuller takes an in-depth look at the history of the replacement of the name of God from ancient scriptures, which was replaced by the words LORD and GOD in early translations as far back as 450 BC.

“The I AM Principle” uncovers the “lost word,” as it has been called by some, which has its root in ancient texts and has been long sought after by those who believe it holds an inherent power over mind and matter. Appearing in the original Hebrew text from which Bibles today are translated, this lost word has been hidden from public view for over 2,500 years.

Author and former editor Kimberly Fuller is an ordained minister and for the past several years has studied the history of the Bible and the reasons behind the mystery of missing texts.

“Of particular interest is the fact that the name of God was deleted prior to even the public distribution of the Bible,” says Ms. Fuller.

According to the author, “The name of God, in Hebrew, YHWH, and in English,’I Am That I Am,’ is at the root of man’s consciousness and is the key to connecting to the Creator and to discovering the realities of the universe, greatly influencing how we as individuals relate to ourselves and to the world. Mankind was given this information over 2,500 years ago for a reason, and this reason must come to light.”

“The I AM Principle” attempts to dispel any superstitious attachments to the ancient and possibly oldest word in existence and offers a convincing argument for its rediscovery and use in modern society.

Newly released, the softcover is available on Amazon.com. and the book and ebook are available from www.theiamprinciple.com . A sample ebook is also available from the Web site.

News Source: Good Gets Better Publishing :: This press release was issued by Send2Press® and is Copyright © 2010 Neotrope® News Network – all rights reserved.

Author Kimberly Fuller, Good Gets Better Publishing, Lakeland, The I AM Principle