You are here: Home › New American Book of ‘Blue Collar’ Haiku Rooted in Works of Japanese Master
By Send2Press Newswire on March 8, 2010 in Colorado, Press Releases 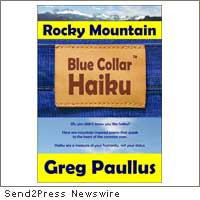 Generally regarded as the most-loved Japanese master, the haiku of ISSA spoke from the heart, rather than from the head. According to Paullus, “Haiku are a measure of your humanity, not your status. Haiku poems should reach out to everyone, even children, not just the pedagogic few.”

As the title suggests, many poems are specifically mountain-inspired, reflecting “aha” moments relating to the majesty of the Rockies and the people and wildlife inhabiting this breathtaking mountain environment.

Haiku are short, typically three-line poems of 17 syllables or less (5-7-5). A haiku reports the essence of a moment as experienced just beyond usual cognizance. But, it does not contain the usual poetic devices such as simile or metaphor. Haiku are divided into two parts, by a technique called “cutting,” which is a surprise twist.

The author wrote his first haiku as a grade school assignment in a small Iowa town. His teacher was so impressed; she would not accept the haiku as his own.

“Gregory,” she said, “who wrote this poem for you?”

“No, I’m afraid you didn’t Gregory. It’s just too poignant for a boy your age.”

The moment was painful, but the passion for poetry was ignited. Later, Greg Paullus studied haiku as part of a curriculum in college while earning a B.A. in English. Drafted shortly after graduation, he served with honor in the United States Army during the Vietnam era. He resumed writing in the advertising business where he founded an agency and earned his living for over three decades. Over the years, the passion for reading and writing haiku never diminished, although most of the haiku in his book are recent expressions.

Newly released, the book is available on Amazon.com and signed books are available on www.bluecollarhaiku.com .

News Source: Greg Paullus :: This press release was issued by Send2Press® and is Copyright © 2010 Neotrope® News Network – all rights reserved.