You are here: Home › The Future of Theater is Looking Up with Suspended Cirque
By Send2Press Newswire on March 16, 2010 in Entertainment, New York, Press Releases 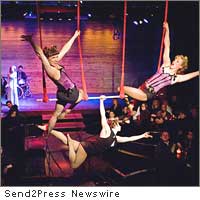 NEW YORK, N.Y. (SEND2PRESS NEWSWIRE) — It seems like everyone saw Pink’s aerial act at the Grammys. Circus skills are no longer relegated to the big top – the general public expects to see someone fly at any big event, whether at a private party or at the opera. Performers of all types are now being pushed to make their performances riskier and more exciting. At the same time, circus performers are finding that just skill is not enough. Tricks and the classic “Ta-dah” moment seem hackneyed these days. So, what’s next for the entertainment industry? Introducing Aerial Circus Theater, a new theater movement now being performed in New York City by Suspended Cirque.

Suspended Cirque is New York City’s first Aerial Circus Theater troupe. Aerial Circus Theater, sometimes called “Nouveau Cirque,” has already become an established performance genre outside of the U.S. thanks to performance companies like Cirkus Cirkor of Sweden, Seven Fingers and Cirque Eloize of Canada, and the Thieree family of France. Using narrative, song and choreography along with the circus acts, these troupes create their shows through the individuality and the artistry of the performers.

It was not that long ago that an aerialist would try to explain their profession, and be met with confused looks. Considered an art form as opposed to a style of entertainment, the general public had difficulty understanding where, when and why an aerialist’s skills would come in handy. Over the years, however, Cirque du Soleil has done for circus what Starbucks has done for coffee: made it ubiquitous, upped the standard, increased the price point, and made the art form necessary.

Now the public demands more physical bang for their buck. While they still enjoy the big tricks, they also look for performances that aren’t merely a spectacle of physical acts. Take Pink’s Grammy performance for example. In no way technically challenging for a circus performer, the act was nevertheless impressive due to the fact she was also singing, and the visuals were stunning.

Thus, a door opens for Aerial Circus Theater in the U.S. Aerial Circus Theater relies heavily on the unique skill set of each performer. Shows are less codified and formulaic, far more personal, and riskier to produce in that replacing any of the performers due to injury or illness affects the storyline and the effectiveness of the show. Yet, at the same time, Aerial Circus Theater also offers the advantage of being more intimate, more unique, and less expensive than the large, slick circuses currently dominating entertainment venues.

In New York City, Suspended Cirque is the first company using circus acts to convey a comprehensible and human narrative. The company turns the traditional cirque performer from an inaccessible superhuman/mystical creature to a real person who is relatable to audience members.

“With Cirque du Soleil shows, the athletes are so perfect, and there is so much happening all at the same time, I find I get desensitized to the difficulty of the tricks,” admits Eren Rosenfeld, a fan of both Cirque du Soleil and Suspended Cirque. “In a Suspended Cirque show, I can see the humanity of the performers, which makes all the difficult tricks that they do seem even more impressive.”

What distinguishes Suspended Cirque from other Aerial Circus Theater troupes, is how the members show their vulnerability as humans first and their physical talents second. Each company member is responsible for creating his/her own role within the greater context of the show as well as creating the individual acts. Having the same person act as the playwright, the director and the performer means that bits of that person’s personality show through and are amplified in the final character. The result is that no performer is ever simply executing a series of tricks, but rather expressing a part of his/herself. The audience feels genuinely connected to the performers, sometimes being inspired to reach out and touch them, in this dynamic exploration of Art imitating Life.

Suspended Cirque was founded by five veterans of the performing arts world: Joshua Dean, Michelle Dortignac, Benjamin Franklin, Angela Jones and Kristin Olness. Members have been seen on Broadway in Cabaret, The Joyce Theater, Lincoln Center, and performed with such names as Twyla Tharp. Between the five of them, a wide range of artistic skill is represented, including but not limited to Broadway-style singing, championship acrobatics, playing the classical clarinet, and Japanese Butoh movement. Suspended Cirque members capitalize on their breadth of knowledge and skill in every production they create.

Within only a year, Suspended Cirque has created 4 different shows, many performed to sold-out houses. Currently Artists-In-Residence at the Galapagos Art Space in Dumbo, Brooklyn, it appears New York City audiences enjoy this newcomer to performance. Aerial Circus Theater, and Suspended Cirque, has arrived.

For additional information on Suspended Cirque, or for more information on their current production, “Swingin’ at Jack’s,” contact Angela Jones, or visit www.SuspendedCirque.com .

News Source: Suspended Cirque :: This press release was issued by Send2Press® and is Copyright © 2010 Neotrope® News Network – all rights reserved.