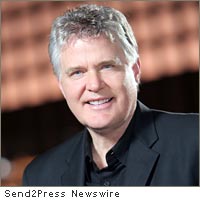 Dr. Garlow is an author, communicator, commentator, historian, and cultural observer. For the last 14 years, he has served as Senior Pastor of Skyline Wesleyan Church in San Diego, Calif., and will continue to do so.

“I am delighted that Jim has accepted my invitation to lead Renewing American Leadership,” Gingrich said. “He is an emerging national leader whose intellect, passion, energy, and talent will allow ReAL to be even more effective in defending and preserving America’s Judeo-Christian heritage.”

“I believe Speaker Gingrich has created an essential vehicle for educating our nation about its profound and unique Judeo-Christian heritage, the foundation upon which our liberties are based and upon which they depend,” Garlow said. “I am truly honored to be partnering with Speaker Gingrich and his team and look forward to what we will accomplish.”

His one-minute historical commentary called “The Garlow Perspective” is heard daily on over 800 radio outlets nationwide. He has authored eleven books including the New York Times best-seller “Cracking DaVinci’s Code” (co-authored with Peter Jones), selling nearly 450,000 copies. Other titles include “The 21 Irrefutable Laws of Leadership Tested by Time” and “God and His People” (originally released as How God Saved Civilization). Highly sought after for his insights on cultural, religious and political issues, Jim has appeared on hundreds of radio and television programs including national TV programs on NBC, CNN, Fox, MSNBC and CNBC.

Jim has been married to Carol for 39 years. She is a graduate of Westminster Choir College in Princeton, New Jersey, and serves as Minister of Prayer and Intercession at Skyline Wesleyan Church. Jim and Carol have four children and five grandsons.

Renewing American Leadership (ReAL) is a not-for-profit, non-partisan 501c3 organization. The mission of ReAL is to preserve America’s Judeo-Christian heritage by defending and promoting the three pillars of American civilization: freedom, faith and free-enterprise.