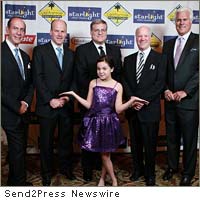 Co-chaired by Starlight board members Carol Savoie, David Getson and John Rosenberg, “A Stellar Night” showcased inspirational stories from Starlight families and paid tribute to humanitarians, who are helping seriously ill children and their families cope with their pain, fear and isolation.

For more highlights and photos from the evening, visit www.starlight.org/events .

When a child or teenager has a serious medical condition, everyone in the family is affected. For more than 25 years, Starlight Children’s Foundation has been dedicated to helping seriously ill children and their families cope with their pain, fear and isolation through entertainment, education and family activities. Starlight’s programs have been proven to distract children from their pain, help them better understand and manage their illnesses, and connect families facing similar challenges so that no one feels alone. Through a network of chapters and offices, Starlight provides ongoing support to children, parents and siblings in all U.S. states and Canadian provinces with an array of outpatient, hospital-based and Web offerings. Programs are also delivered internationally through affiliates in Australia, Japan and the United Kingdom.

Forming Strong Relationships is Key to Success and Fulfillment for Women
Extend Windows Server 2008 with EASEUS Partition Master Server, No Tweaking, No Fuss!