You are here: Home › 32-Year-Old Embarks on Photo-Journey Across America – He Took His First Photos Falling Out of a Plane
By Send2Press Newswire on March 24, 2010 in California, Press Releases 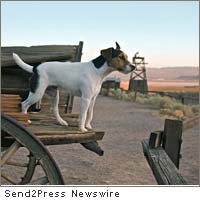 LOS ANGELES, Calif. (SEND2PRESS NEWSWIRE) — Thirty-two-year-old Wil Fernandez calls himself “the youngest Winnebago owner in America.” He should know, since every week or two he pulls his 31-foot rig into the outskirts of a different American town, parks, and sets up shop.

Fernandez is a life photographer, embarked on a year-long enterprise to travel the U.S. from coast-to-coast and back again, observing and recording what he finds. In the process, he plans to build his photography portfolio, gain a better understanding of Americans, and find the next city where he’d like to live.

“I get ants in my pants if I stay in one place too long,” said the vagabond artist, who traveled Western Europe, Thailand, Mexico and South America before focusing on his homeland, the USA. Fernandez supplements his photography with Internet marketing – a form of self-employment he finds easy to manage from his laptop anywhere in the world.

A typical day on the road for him consists of getting out of bed early, exploring the area hiking, running or bicycling with Sid (his Jack Russell Terrier), breakfast on the roof of his RV, then working at the computer on his consulting business and Internet sites.

Fernandez says over 5,000 people follow his travels through Twitter, combined with another 2,000 Facebook fans and nearly 10,000 visitors to his photo blog each month. Suggestions come to him from all over the country of places he should see and events taking place in the regions he plans to visit.

This lifestyle is really the best of both worlds,” he said. “You get to have a consistent house, and on the outside the environment keeps changing.” He added that he never has to mow the lawn.

One of the projects Fernandez is working on is a bilingual book, co-authored with his aunt, about wild, stray, and working dogs around the world. The book will showcase dozens of dog photos he has taken throughout the world. Fernandez has a bachelor’s degree in behavioral psychology. He says he’s fascinated with the way cultures treat their dogs as an expression of the values of the culture.

Some of the first photos Fernandez ever took were shot while he was falling out of a plane. He spent five years in U.S. Army Special Operations and shot pictures while parachuting over hundreds of locations.

Since then his camera has been almost constantly at his side. “I bring it everywhere,” he said. “For me, it’s the absolute worst feeling being somewhere, seeing something fascinating, and not being able to capture it with a photograph. It physically hurts. I have to tell myself, ‘Take a picture with your eyes.'”

His Web site describes Fernandez’s work as “Real photos of real people taken while having a really good time.” Follow his adventures across America by visiting www.wilfernandez.com — and keep an eye peeled for that Winnebago.

News Source: Wil Fernandez :: This press release was issued by Send2Press® and is Copyright © 2010 Neotrope® News Network – all rights reserved.