You are here: Home › New Book Release Tells the Heartbreaking True Story of a Survivor of Sexual Abuse in the Catholic Church
By Send2Press Newswire on March 24, 2010 in California, Press Releases 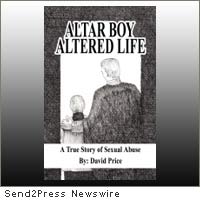 LOS ANGELES, Calif. (SEND2PRESS NEWSWIRE) — “Altar Boy Altered Life” (ISBN 978-159858-724-1, Dog Ear Publishing) is a new book released by author David Price. When he becomes depressed and suicidal in 1993 at age 28, David Price decides to seek therapy. During his sessions David begins to uncover repressed memories of being sexually abused as a teen (1979-1984) by a trusted and well-loved Catholic priest.

Father Michael Harris, an attractive and athletic young priest and headmaster of David’s school, was an extremely popular figure in the community. David Price, one of fourteen children and orphaned by the age of eight, had led a difficult life and was an innocent teenager when he met the man who would change his life forever.

Sensing David’s innocence and vulnerability, Father Harris singled him out and became David’s special “mentor.” Over the next three years, the popular and well-liked Father Harris repeatedly summoned David to his office where he locked the door and on occasion took David back to his home during school hours and sexually molested him. “Remember, this is our secret,” he would tell David each time.

After seeking therapy and uncovering his memories of sexual abuse, David took groundbreaking action against Father Harris by suing the Catholic Church and was then subjected to grueling interrogations by several attorneys that called into question his own sexuality and morality.

The ensuing scandal made national headlines, blew the lid off of a major cover-up, and subsequently opened the flood gates for a massive settlement against the Catholic Church for hundreds of victims.

“Altar Boy Altered Life” is both shocking and moving. It is the story of an uphill battle for justice and retribution. After reading this personal story, no reader will think lightly of the issue of sexual abuse in the Catholic Church again.

News Source: David Price :: This press release was issued by Send2Press® and is Copyright © 2010 Neotrope® News Network – all rights reserved.