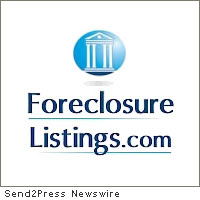 NEW YORK, N.Y. (SEND2PRESS NEWSWIRE) — Data published by ForeclosureListings.com comparing February 2010 to January 2010 shows that Texas has witnessed the highest increase in foreclosures with a rise of 35.3 percent, followed by Michigan at 17.54 percent, California at 11.93 percent, and Florida at 4.71 percent increases. Georgia actually showed a decrease of 5.55 percent and Arkansas showed the largest drop in foreclosures down 28.6 percent.

The nation is struggling with a lack of jobs and continued pressure on home values leaving many homeowners with mortgages higher than their homes’ value. Several states are creating emergency funds to help the temporarily unemployed from being foreclosed upon. But the numbers continue to paint a bleak picture.

Even with additional funds from the government there are too many people facing unemployment and weak housing values to enable many to borrow the necessary amount to prevent foreclosure or to purchase a home in foreclosure.

49 states have participated in uniform, minimum standards for licensing of mortgage loan originators that began in New York and North Carolina, and became law, and then became a model for Congress to enact the Secure and Fair Enforcement for Mortgage Licensing Act in 2008. Having learned their lessons from government intervention of relaxing guidelines in order to help more people purchase more homes, the laws are meant to reduce the amount of foreclosures in the future, but the damage has already been done.

Our foreclosure data compares February 2010 versus January 2010. Note the actual number of homes as opposed to the percentages in just 30 days:

Notice that Atlanta, Georgia and Denver, Colorado actually had decreases in foreclosures from the previous month, yet the number of actual foreclosures was 1,039 and 2,056, respectively. The foreclosure trend continues.

We found it interesting that the larger cities as above had relatively fewer foreclosures percentages from the previous month than the comparatively smaller cities of Spring, Texas and of Garland, Texas with 165 and 167 total foreclosures at 46 percent and 43 percent increases over January, respectively.

Larger cities such as Houston, Texas which showed a change from January of over 37 percent with 1,192 homes foreclosed, and Phoenix, Arizona with over 34 percent change and 1,645 homes foreclosed continue to demonstrate the plight of unemployment and abandonment in search of locations for people to live where they can find jobs.

But there were some signs of improvement, for lack of a better word. Little Rock, Arkansas showed a monthly drop of 35.34 percent with only 75 foreclosures from the previous month, and Riverdale, Georgia showed a decrease of 25 percent with only 956 homes foreclosed. Likewise, two large cities of note, Washington, D.C. reported 169 foreclosures, a difference of 19.9 percent less than January, and Atlanta, Georgia reported 1,039 foreclosures, a drop of 6.98 percent in the same time period.

But homeowners, grappling with the need to lower their expenditures are finding that the mortgage notes they carry are higher than the current value of their homes, as revealed in the prices for some of the average prices in the top states, below.

It should be noted that homes bought in foreclosure are often in various states of disrepair and the price of the home is adjusted accordingly. And a distressed property can, and usually does, affect the price values of other homes in the neighborhood.

As foreclosed homes are bought and repaired and brought up to their true values, the neighborhood’s home values improve, and thereby the home value of the previously distressed property increases.

Today one in every 418 homes in the U.S. has been filed in foreclosure, topping over 300,000 filings for the 12th straight month, bringing the nationwide total to almost 1.4 million. Nevada, the state that just a few years ago couldn’t keep up with the demand for new home building is now the leader in foreclosures at four-times the national average, with Arizona, California, and Florida close behind.

The opposite side of the coin is that purchasing a home at discounted prices has never been easier as distressed properties now account for about one-third of all home re-sales.

News Source: ForeclosureListings.com :: This press release was issued by Send2Press® and is Copyright © 2010 Neotrope® News Network – all rights reserved.