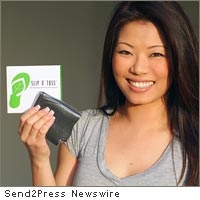 “This product would be useful on the set,” commented one actor. “We have to be barefoot while filming love scenes, and Slip N’ Toss would be perfect to slip into while they are setting up the shot before getting into bed, and after.”

“This was the first public showing of Slip N’ Toss,” said Moth, “and in the midst of all the Oscar fashion glitz the reaction was extremely positive. We will be participating in future events including fundraisers, sponsorship of fashion shows and gifting suites. There are many applications for this disposable footwear product and I anticipate widespread adoption.”

Convenient, disposable, 100 percent biodegradable, Slip N’ Toss is designed for all shoe emergencies. This healthy footwear innovation can be a preventative measure for walking barefoot. There should never be a reason to be walking bare feet in the mean streets!

Slip N’ Toss sandals are tri-folded, shrink-wrapped, compact and easy to carry in car, shoulder bag, or purse for airport security or after a night out. Other uses: hotels, hospitals, clinics, spas, the gym, movie sets and photography sessions. Available in both men’s and women’s sizes, Slip N’Toss sandals are made out of 74.9 percent organic carbon – a GREEN product!

Slip N’ Toss founder, Yadi Moth, is a Los Angeles-based innovator and designer. Throughout her time in college, as well as when she held positions at startup and Fortune 500 companies, her desire to be an entrepreneur never wavered. One night, after exiting a dance club and seeing a friend take off her high heels and walk barefoot through the city streets, she came up with the idea of Slip N’ Toss disposable footwear.