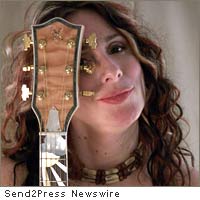 “We’re excited to have Danielle join the team,” said Christopher Simmons, CEO of Neotrope, and MIN editorial director. He adds, “She has a storied history in performing and song writing, and has a unique perspective on the business of music and the indie music and film scenes.”

Music Industry Newswire ( www.musicindustrynewswire.com ) is an online magazine covering music entertainment, music instruments and technology, industry news, interviews, and how-to articles. It was founded in 1995, celebrating its 5th anniversary in 2010. The publication averages more than 600,000 page views per month. A full site redesign is coming June, 2010.

Named one of the Top Female Producers in Music (Music Connection Magazine) and included as one of the Ten Most Powerful Women in Music (Curve Magazine), multi-award-winning musician/writer/producer Danielle Egnew burst onto the scene fronting and producing the all-female sensation “Pope Jane” and has produced and released a total of 15 albums in five genres. A Montana native, she has written for many artists including Chris Ledoux. Danielle is also an accomplished filmmaker, composer, and actress, and her diverse career has been the subject of several magazine cover stories and books by Billboard Publishing. Currently Danielle resides in Los Angeles, where — in-between tours and film schedules — she is an on-air personality on L.A. Talk Radio. She is signed to Maurice the Fish Records.

Regular columnists include John Scott G (aka recording artist “The G-Man”), Loren Weisman, David Kronemyer, and Christopher Laird Simmons. Weisman is an accomplished music producer with over 300 albums under his belt, and author of the forthcoming book, “The Artist’s Guide to Success in the Music Business” (ISBN: 978-1-935359-33-3). Scott G is a voting member of NARAS, has nearly a dozen albums out, and his marketing firm in Los Angeles provides voiceover and music for radio/TV; and he manages both a music publishing company and music video production firm. Kronemyer formerly was Vice President of Capitol Records and Senior Vice President of Atlantic Records. Segueing to the movie business he became President of Gold Circle Films and then President of Cerberus Films. Simmons has been writing about the music business since 1984, is an award-winning marketing guru, is frequently interviewed by tech and entertainment publications, has composed music for two cable TV series, and he is a member of ASCAP and PRSA. Simmons is also the author of “Fractopia,” a book of digital artwork (ISBN: 978-0-9710555-0-6).

Music Industry Newswire(TM) is part of the Neotrope(R) News Network ( www.neotrope.net ). Neotrope is a registered trademark in the U.S. and other countries.

News Source: Neotrope :: This press release was issued by Send2Press® and is Copyright © 2010 Neotrope® News Network – all rights reserved.