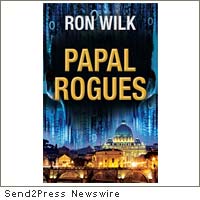 MIAMI, Fla. (SEND2PRESS NEWSWIRE) — “Papal Rogues” (ISBN: 978-1936183029), the debut thriller by author Ron Wilk is now available on Amazon.com, ronwilkfiction.com, and through book stores nationwide. “Papal Rogues” is published by Langdon Street Press and draws the reader into the clandestine underbelly of corporate America, the U.S. Military and most shockingly — the Vatican.

In a daring and controversial “what if” scenario, Ron Wilk creates a compelling and multi-layered thriller that leaves readers wondering just how far a nefarious few will go to recapture the reins of power and just how vulnerable the world can be when the secrets of cyberspace fall into the wrong hands.

“Throughout history the world’s most powerful institutions have always spawned rogue elements, who blur the lines between good and evil in their ‘ends justify the means’ pursuits,” explains Wilk. “In Papal Rogues, I take the readers on an adrenaline-pumping thriller that explores what happens when someone uncovers what was meant to remain hidden.”

While “Papal Rogues” weaves a complex and intriguing tale, Wilk displays his levity and wit by revealing much of the story though the journey of his naive protagonist, Calder McMonagle, who ventures from home in Scotland to California, where he investigates the mysterious death of his computer hacker friend, Michael Squire.

“Papal Rogues” is Ron Wilk’s first published novel, however, the author has released two highly successful Internet novels. With over 900,000 pages downloaded to date, both “Red Death” and “Kerberos” are available at www.ronwilkfiction.com .

Born in New York City, author Ron Wilk is a retired neurologist. He earned his medical degree at the world’s oldest medical institution, the famed University of Bologna Faculty of Medicine in Bologna, Italy. His youthful years in Europe broadened his cultural experiences and later influenced much of his fiction writings.

Upon graduating, Wilk trained at the prestigious Mt. Sinai Hospital of New York City where he achieved chief resident status. After a twenty-three year career in Boca Raton, Florida, following an injury, Wilk retired from medicine and is now a full-time author.

News Source: Ron Wilk :: This press release was issued by Send2Press® and is Copyright © 2010 Neotrope® News Network – all rights reserved.