You are here: Home › Foreclosures Up by 7 Percent During First Quarter
By Send2Press Newswire on April 19, 2010 in Florida, MIAMI, Fla., Press Releases, Real Estate 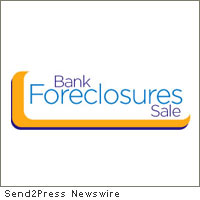 But breaking down the statistics does show positive signs for the future, especially since Default Notices, which mark new foreclosures, are down 1% from the first quarter of 2009. However, over the same period of time, bank repossessions were up a staggering 36%.

“A repossession is usually the final stage of a foreclosure,” remarked Simon Campbell, a business analyst with Bank Foreclosures Sale. “The properties are repossessed, and then sold off from there. So, now the banks and lenders have a huge supply of REO homes to deal with. This is great news for buyers, because a big supply means low prices, and the banks are really looking to get these homes off their hands. I wouldn’t be surprised if we see average sale prices really drop in the coming months.”

The top 3 states for first quarter foreclosure homes rates were Nevada, Arizona, and Florida, although Arizona’s current rate is actually down 16% from the first quarter of 2009. Only one other state in the Top 10 saw a decline year over year, and that was California, down 6%. Utah, a relative newcomer to the top ten, saw the biggest year over year increase at roughly 75%, followed by Idaho, which rose 48%. California saw the largest number of new defaults in the first quarter by far, with over 83,500. The next closest was Nevada, followed by Michigan. Colorado is still seeing increases as well, hanging on to the number 10 spot with a 27% rise in foreclosures from the first quarter of 2009.

Georgia had the highest foreclosure property increase from the final quarter of 2009, at 30%. Idaho and Illinois saw the only decreases from last quarter, at 13.5% and 6.5%, respectively.

Visit Bank Foreclosures Sale (www.bankforeclosuressale.com) to stay informed about developments in the foreclosure marketplace that can affect how you buy and invest, as well as to browse foreclosure listings in your area.