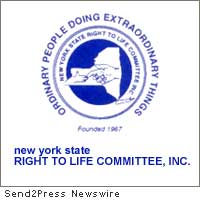 ALBANY, N.Y. (SEND2PRESS NEWSWIRE) — The New York State Right to Life Committee held its annual Lobby for Life Day yesterday, April 27th, in the well of the Legislative Office Building in Albany. About 200 people attended the event, which focused on the Unborn Victims of Violence Act, a bill currently pending in the state legislature that provides that those who kill or injure an unborn child during a crime of violence against a pregnant woman may be held criminally responsible.

Democratic legislators Assemblyman Michael Benjamin and Senator Darrel Aubertine, the sponsors of the bill, spoke about the importance of ensuring that unborn babies are recognized as victims under New York State law when the mothers have made a choice for life.

The keynote speaker was Cashawnda Rowlett from Troy, NY. Cashawnda shared the horrifying story of the attack on her life and the life of her unborn baby in 2003. When Cashawnda told her boyfriend that she was pregnant and refused to abort their baby, he attempted to kill the baby by sneaking up behind her and stabbing her repeatedly. Her attacker left her for dead, and a neighbor called 911.

Miraculously, Cashawnda and her baby daughter, Canya, lived. Under New York State law, the assailant could not be charged with the attempted murder of Canya.

There is a federal Unborn Victims of Violence law, but it applies only to federal crimes. Most crimes of violence in New York are state criminal acts. Currently, 35 other states have homicide laws that recognize the unlawful killing of unborn children in at least some circumstances.

A recent incident involving a New York pharmacist, who traveled to Pennsylvania to secretly slip his pregnant girlfriend abortion inducing pills, illustrates the gross inconsistency in state laws. The baby died as a result of the drugs and Pennsylvania recognized the attack on the unborn child as an act of criminal homicide. Because they have an Unborn Victims of Violence Act, the man has been charged with criminal homicide of an unborn child, first-degree murder of an unborn child, aggravated assault of an unborn child, and aggravated assault. Had she traveled to New York, instead of him traveling to Pennsylvania, he could not have been charged with the murder of that same child and he would not be facing 20 years in prison as he is in Pennsylvania.

Cashawnda has vowed to continue her quest to see that the Unborn Victims of Violence Act is passed in NY State, telling the group, “The reason he attacked me was to get to my baby. He didn’t want to be a father. Then I found out that his violent attack on my baby, which was the only reason he attacked me, would not be recognized by the law…unborn babies deserve justice too.”

Deb Cody, Legislative Director for NYS Right to Life and Cashawnda Rowlett are available for interviews.