You are here: Home › New Kodiak Cola Offers Premium Taste at a Kodiak-Sized Value
By Send2Press Newswire on May 4, 2010 in Food and Beverages, HUNTINGDON VALLEY, Pa., Pennsylvania, Press Releases 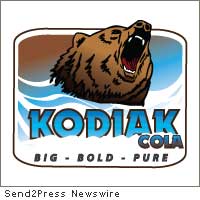 HUNTINGDON VALLEY, Pa. (SEND2PRESS NEWSWIRE) — Multi-Flow Industries (www.multiflow.net), a Beverage Processor near Philadelphia, PA, has proudly produced value-priced cola concentrates for 75 years. CEO Mark Stephens, however, said, “Kola with a ‘K’ is out of production. And Multi-Flow is incredibly proud to introduce our new premium cola that beats both national brands in blind taste tests, delivers an impactful brand message, and best of all, offers a true value to foodservice operators as a lower-priced alternative to both Coke and Pepsi.”

The new cola brand introduced recently in Multi-Flow’s headquarters is being marketed as “Kodiak Cola.” The journey, according to Stephens, was based upon employee input, customer feedback, and several branding contests that “all led us to one conclusion: Kodiak Cola is poised to be a national player in the cola wars.”

The first challenge, according to Product Development Director Owen Rothstein, was to create a cola beverage that would stand up to the national brands in blind taste tests. “We tested dozens, if not hundreds, of recipes using various blends and mixtures of cola flavoring, including vanilla, cinnamon, and citrus. Then we pounded away at different blends of sweeteners to ensure we outscored the national brands in sensory attribute tests.” The results, according to Rothstein, prove that the new cola outscores the current national brands by as much as a 2-to-1 ratio. And best of all, operators can save as much as $30 per Bag-in-Box by converting from Coke/Pepsi to Kodiak Cola. “That could equate to thousands of dollars a year,” Rothstein said.

The next challenge was to create a brand that delivered a premium message. “We held several internal contests with our employees to develop and then choose a brand image that represented the 3 attributes we wanted to deliver: Big, Bold, and Pure,” Stephens said. “After several inter-company polls, we were convinced that ‘Kodiak Cola’ was the brand image that represented everything we were trying to convey.”

The imagery of a Kodiak Bear representing the new cola was developed by District Service Manager Randy Christopher. “When I first tasted the new cola,” said Randy, “I just kept thinking about a gigantic grizzly bear, roaring, a huge and natural creature that’s not afraid of anything. For years, we’ve sold a generic cola, but now, we have a beverage that’s not afraid to go toe-to-toe with the national brands.”

Next job for the Product Development Team was to develop the logo that would accompany the new cola into a widely-anticipated product launch. Instead of developing logo concepts with their Graphic Designer, the Multi-Flow team posted a “Logo Contest” on logomyway.com, hoping that several different designers would offer up many different artistic approaches to convey the “Kodiak” message. The results, according to Business Development Manager Brett Rosenbloom, were incredible. “We received over 175 different logo concepts from graphic designers all over the world.” And the winning concept was, once again, put to a company-wide vote.

“The end result,” according to Stephens, “is a cola brand that is being universally applauded throughout the Multi-Flow Family.” Kodiak will be branded under the “Micro-Brewed by Multi-Flow” logo, and is available in Regular Cola as well as Diet Cola. Rothstein said, “Diet Kodiak Cola was put through the same scrutiny as the Regular version. And we’re proud to announce that Diet Kodiak Cola demands the same attention as the regular recipe: Big, Bold, and Pure.”

Kodiak Cola and Diet Kodiak Cola join the rest of the “Micro-Brewed by Multi-Flow” lineup as premium fountain soft drinks offered at a value price versus national brands. All are available for immediate national distribution to restaurants, foodservice, and all other locations that serve fountain-dispensed soft drinks.

News Source: Multi-Flow Industries :: This press release was issued by Send2Press® and is Copyright © 2010 Neotrope® News Network – all rights reserved.