You are here: Home › The Savannah Economic Development Authority Board of Directors Announces Search for Next President and CEO
By Send2Press Newswire on May 20, 2010 in Business, Georgia, Management Changes, Press Releases, SAVANNAH, Ga. 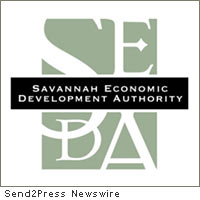 SAVANNAH, Ga. (SEND2PRESS NEWSWIRE) — The Succession Planning Committee of the Savannah Economic Development Authority (SEDA – www.seda.org) Board of Directors announced on Monday the selection of Heidrick & Struggles to lead the search for SEDA’s next president and CEO. The process will begin immediately and is expected to take 90 to 120 days to name the selected candidate.

Heidrick & Struggles is an international, premier provider of executive search and leadership consulting services, including talent management, board composition, executive on-boarding and M&A effectiveness. The firm boasts more than 55 years of industry experience and a global team of nearly 400 consultants working from more than 60 locations in principal cities of the world.

The Succession Planning Committee launched an exhaustive analysis of national executive search firms following SEDA President and CEO Rick Winger’s announcement that he would retire, effective July 1, 2010. The committee conducted community-wide focus group meetings and personal interviews to identify the ideal skills and qualities for the next president and CEO. Armed with that valuable data, the search firm will call for qualified candidates, evaluate applicants, and make recommendations to the committee for interviews and final selection.

Twice ranked as one of the best development groups in the country, SEDA has a clear record of success including the recent announcement that Mitsubishi Power Systems Americas Inc. is investing more than $300 million to build a state-of-the-art manufacturing facility in Chatham County. Home to the fourth largest and fastest growing port in the country, Savannah is positioned for unprecedented growth with the upcoming completion of the Panama Canal expansion. Port-related distribution is a major economic generator for the area. And, with Gulfstream Aerospace Corporation as the region’s largest private employer, Savannah also enjoys a strong manufacturing base. Savannah’s diverse economy also includes a large tourism industry, two regional healthcare systems, a significant government/military presence as well as a growing number of creative and technical businesses.

The Savannah regional workforce is supported by an 11 county labor draw area, fueled by more than 50,000 students attending the 19 area colleges and universities, including the Savannah College of Art and Design, Georgia Tech Savannah, and Georgia Southern University.

An independently funded organization, SEDA can act in the best interests of both the client and the community without the hindrances often associated with publicly-funded operations. And, Savannah/Chatham County itself, residents and government alike, have helped SEDA achieve its mission by continuing to invest in infrastructure necessary for it to remain a vibrant, world-class community long into the future.

It is expected that the search will still be in process at that time of Winger’s departure. In order to insure continuity of leadership and proactive efforts, the board named SEDA Sr. VP Lynn Pitts, to the position of Interim President and CEO on April 13.

David Paddison, chairman of the committee, said, “The succession planning committee has been working for nine months to plan and execute a first rate national search for SEDA’s next president and CEO. With Dale Jones and the professional team at Heidrick & Struggles on board, all the right ingredients are in place to bring about a successful outcome for our community.”

All inquiries should be directed to seda@heidrick.com .