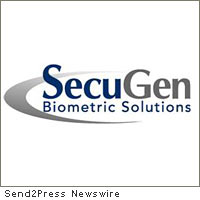 SANTA CLARA, Calif. (SEND2PRESS NEWSWIRE) — SecuGen, the world’s leading optical fingerprint device vendor, is pleased to announce that it has been awarded patents in Canada and Japan. In Canada, SecuGen was awarded patents for the inventions entitled “Method and Apparatus for Reduction of Trapezoidal Distortion and Improvement of Image Sharpness in an Optical Image Capturing System” and “Optical Fingerprint Image Capturing System.” In Japan, it was awarded a patent for “High Contrast, Low Distortion Optical Acquisition System for Image Capturing.”

SecuGen currently holds a patent portfolio consisting of 35 patents, most of which are at the core of SecuGen’s fingerprint recognition technology. SecuGen’s sensors are well known for capturing very high quality, high contrast images and for being rugged. They are made of a hardened glass that is extremely resistant to scratching. These sensors are used in all of SecuGen’s USB fingerprint readers as well as SecuGen’s OEM fingerprint modules.

SecuGen sells its fingerprint readers and OEM fingerprint modules through a worldwide network of several hundred partners, ranging from systems integrators and software developers to hardware manufacturers. As a consequence of its worldwide sales channels SecuGen products are being used in over 80 countries.

Won Lee, CEO of SecuGen said, “For more than a decade we have worked to develop and manufacture a suite of fingerprint biometric products that are targeted to the real world commercial and government implementations that our partners are so focused on. While we are very proud of these new patent grants and believe that they are a result of our effectively focused efforts, we are not resting. SecuGen continues to work hard to both improve our existing products and invent tomorrow’s products.”

SecuGen Corporation (www.secugen.com) is the world’s leading provider of advanced, optical fingerprint recognition technology, products, tools and platforms for physical and information security. SecuGen designs and develops FBI-certified fingerprint readers and OEM components, developer kits and software, including NIST/MINEX-compliant algorithms. Known for high quality, ruggedness, and performance in a wide variety of applications and environmental conditions, SecuGen products are used by world-leading financial, medical, government, educational and corporate institutions and are sold through a partner network of over 200 original equipment manufacturers, independent software vendors and system integrators around the world.

SecuGen(R) is a registered trademark of SecuGen Corp. in the United States and other countries.

News Source: SecuGen Corporation :: This press release was issued by Send2Press® and is Copyright © 2010 Neotrope® News Network – all rights reserved.