You are here: Home › A New Earth Based On Old Texts? Researchers Compare Writings of Eckhart Tolle and Belzebuub
By Send2Press Newswire on June 28, 2010 in Holistic and Spiritual, NORFOLK, Va., Press Releases, Virginia 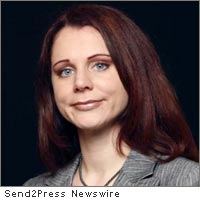 NORFOLK, Va. (SEND2PRESS NEWSWIRE) — A research study addresses concerns about similarities between Eckhart Tolle’s “A New Earth” (2005) and Belzebuub’s “Searching Within” (2001) and “The Journey to Enlightenment” (2002). Dr. Gabrielle Wood, who initiated the study, has published the results online today.

Experts estimate that people spend billions of US dollars each year on CDs, DVDs, lectures, retreats, and products that will help them to develop spiritually. Turning to independent spiritual leaders, such as Eckhart Tolle, for guidance on religious matters is a rising trend.

Without the formal structure of traditional religions, there is no agency responsible for handling concerns that arise with these spiritual leaders. Concerns about similarities between “A New Earth: Awakening to Your Life’s Purpose” and the writings of Mark Pritchard “Belzebuub” surfaced shortly after Oprah Winfrey selected A New Earth for her Book Club in 2008.

“The concerns were never formally addressed, and considering how many people use the book, a systematic comparison of the texts was a logical starting point,” says Dr. Gabrielle Wood, psychologist and expert in leadership studies.

A research team conducted systematic comparisons of texts, Web sites, and other material of the two spiritual leaders. Experts, with backgrounds in Religious Studies and Philosophy, assessed the degree and nature of similarities.

Included in the comparisons was Tolle’s ten-week webcast seminar, co-hosted with Oprah Winfrey in 2008. The webinar was compared to two of Belzebuub’s nine-week online courses.

The courses appear arguably similar in structure. The analysis of their writings revealed over 700 pairs of comparable quotes. Experts rated the degree of similarity in these quotes using a five-point rating scale, and 214 pairs of quotes received ratings of “Highly Similar” or “Similar.”

Results and examples from the study have been published online at https://sites.google.com/a/cnu.edu/gabrielle-wood/strikingsimilarities as of June 28, 2010.

Dr. Gabrielle Wood lectures on leadership studies at Christopher Newport University. Her research focuses on positive leadership approaches, with an emphasis on authentic and spiritual leadership. She has extensive research experience and expertise in research methodologies. More information can be found here: https://sites.google.com/a/cnu.edu/gabrielle-wood/researcherprofile .

News Source: Gabrielle Wood :: This press release was issued by Send2Press® and is Copyright © 2010 Neotrope® News Network – all rights reserved.