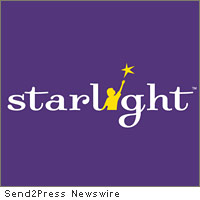 LOS ANGELES, Calif. (SEND2PRESS NEWSWIRE) — Neotrope and its Send2Press service recently “adopted” Starlight Children’s Foundation(TM) as its premier charity program recipient. Throughout the month of July as part of the adoption program, when a donor gives $50 or more to Starlight they will have the opportunity to issue a free national online press release through Neotrope’s Send2Press(R) Newswire service, which is syndicated worldwide and also appears on many top news sites and social networks in the Neotrope News Network, which generates nearly 20 million page views per month.

“This program rewards individuals and companies for being Starlight donors,” said Neotrope CEO, Christopher Laird Simmons; a member of PRSA and ASCAP. “Everyone has something to promote. If you make a small donation, you get an opportunity to publicize your company, your book, blog, gallery showing, or whatever newsworthy event or endeavor you may want to publicize. It’s a win-win for everyone.”

Donors will have until July 31, 2010 to make a qualifying donation at http://www.starlight.org/promotions . If they choose to donate $100 or more, donors will have the option to choose other Send2Press services at a discount (such as $100 off of a nationwide targeted media blitz). Neotrope’s Send2Press services can be utilized no sooner than 3 working days from the confirmed date of the donation and no later than October 1, 2010 (subject to all terms/limitations).

“Thanks to Neotrope’s generosity and pro bono public relations support of Starlight over the last year and a half, we know how valuable its PR distribution service is,” says Jenny Isaacson, Vice President of Brand Marketing and Communications, Starlight. “We hope that many people and businesses will make a donation and start to use Neotrope’s Send2Press service as a result. It’s a wonderful opportunity to easily support Starlight and get some real value for your donation.”

Since 1983 Neotrope has provided affordable targeted news dissemination Direct-to-Editors(TM), professional press release writing, and agency of record services to small and medium businesses, along with services like photography, graphic design, Web development/hosting, and search engine optimization and marketing. The company pioneered the concept of search optimization of press release content back in 1997. All Neotrope/Send2Press staff are accredited public relations (PR) professionals and/or working journalists.

Neotrope is a member of the Better Business Bureau (BBB) and BBBOnLine Program; a member of GS1 (formerly Uniform Code Council); is listed with Bowker for ISBNs; is listed with the RIAA for ISRCs; and was an INC. 5000 company in 2009. Neotrope(R) is a registered trademark in the U.S. and other countries.

Celebrating its 10th anniversary in 2010, Send2Press(R) (a service of Neotrope) offers best-in-class affordable news distribution directly to working print and broadcast media, but also online and social media, and deep into search engines using proprietary Neotrope ContextEngine(R) technology. Originally known as Mindset Netwire, Send2Press was the first (and is still) the only newswire service whose staff is comprised entirely of working journalists, published authors, and accredited PR professionals. Learn more about Send2Press(R) at www.Send2Press.com .

When a child or teenager has a serious medical condition, everyone in the family is affected. For more than 25 years, Starlight Children’s Foundation(TM) has been dedicated to helping seriously ill children and their families cope with their pain, fear and isolation through entertainment, education and family activities. Starlight’s programs have been proven to distract children from their pain, help them better understand and manage their illnesses, and connect families facing similar challenges so that no one feels alone. Through a network of chapters and offices, Starlight provides ongoing support to children, parents and siblings in all U.S. states and Canadian provinces with an array of outpatient, hospital-based and Web offerings. Programs are also delivered internationally through affiliates in Australia, Japan and the United Kingdom. To learn more visit www.starlight.org .

News Source: Neotrope :: This press release was issued by Send2Press® and is Copyright © 2010 Neotrope® News Network – all rights reserved.

Whiteflash.com Searches for a Diamond in the Rough with New Design Competition
Taylor Wilshire to Receive Prestigious Award at Executive Business Conference