You are here: Home › A Citizen’s Attempt to Restore the Democratic Process to the 2010 New York U.S. Senate Campaign
By Send2Press Newswire on July 14, 2010 in Elections and Politics, New York, NEW YORK, N.Y., Politics, Press Releases 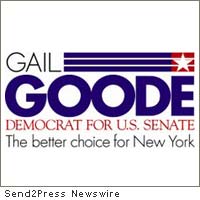 NEW YORK, N.Y. (SEND2PRESS NEWSWIRE) — “New Yorkers have a right to a Democratic primary,” says U.S. Senate Candidate Gail Goode. Goode built an organization of citizens to collect over 45,000 signatures from registered Democrats, who agreed with her mission to give voters of the Empire State a choice for Senator in this year’s Democratic Primary. Goode has been a tough lawyer and advocate for the people of the City of New York. As a Deputy Borough Chief in New York City’s Tort Unit, Gail has tried and supervised hundreds of cases defending hardworking people and saving New York taxpayers millions in litigation costs. As a former Assistant District Attorney, Gail prosecuted career criminals who committed violent crimes against New Yorkers.

Noting that Gillibrand was appointed by Gov. David Paterson, Goode said, “I agree with Manhattan Borough President Scott Stringer who said before he took himself out of the race, that “voters have an expectation for a Senate seat held by Kennedy and Moynihan, that there will be a discussion of these issues through the electoral process.”

“It is clear that all kinds of pressure was brought to bear on several potential candidates to make sure that Governor Paterson’s appointee, Senator Gillibrand, did not have a serious opponent this year,” said Gail Goode. Even Robert Kennedy and Hillary Clinton who came from outside the State to run here in New York, had opposition. Goode thinks New Yorkers are paying a very heavy price for the field being cleared for the Senator simply because those working for her do not believe she can defend her very weak and inconsistent voting record in a competitive election.

Goode said: “The backroom pressure to push out potential challengers has robbed the ability of New Yorkers to put pressure on their Senate candidates to address their needs rather than the special interests and lobbyists that run congress and contribute to the Gillibrand campaign.”

The Goode campaign will focus on the newspaper editorials that raised doubts about the Senator’s integrity when Ms. Gillibrand changed her positions on so many fundamental issues after she was appointed Senator. Goode says leadership should not be limited to the latest poll results. With all her flip-flopping on major issues the Goode campaign will ask “Who is the real Kirsten Gillibrand and what does she really believe?” Before she dropped out of her own Senate bid, Congresswoman Carolyn Maloney told the Daily News editorial board that she wanted to question Senator Gillibrand’s “Character.”

Goode is running to ask the important questions of Senator Gillibrand such as why this year she supported the repeal of a federal policy on record keeping for gun background checks; a law she originally co-sponsored a year earlier in Congress. As a Bronx Assistant DA Goode examined the bodies of gun shot victims and witnessed first hand the terrible result of the lack of those background checks on illegal guns. Perhaps this issue most of all is illustrative of the difference between Ms. Goode and Ms. Gillibrand: Goode’s life experiences make her better prepared to represent the interests of New Yorkers in the Senate. Her deep convictions and belief forged by these experiences, eliminate the need for pollsters, focus groups and speech writers to tell her what positions to take.

Goode believes that the American Democratic process and a real discussion on issues and ideas will defeat the millions that Gillibrand will spend on her campaign, donated by lobbyists and special interests that control what happens in Washington. Goode’s concern for the danger facing our nation in electing yet another candidate who is controlled by Washington special interests run so deep that she has spent her life savings on petitioning to gain ballet access. “Senators who say anything to get elected but do the bidding of the lobbyists have caused the BP oil spill, the Wall Street crash and many of the other serious problems facing our country,” Goode charges.

Goode asks: What New Yorker if given a choice, would vote for a senator who tried to block a federal investigation into the connection between cancer and cigarette smoking? According to a New York Times op ed on April 9th, 2009 “Ms. Gillibrand spent a significant chunk of her professional life working at a prestigious New York City law firm and representing the world’s largest cigarette company, Philip Morris. . . Where her duties included helping the company fend off the Justice Department as it sought damaging research and other internal documents regarding the health risks of its products.”

On February 19, 2010 the New York Post urged Mort Zuckerman to run for the U.S. Senate to improve the quality of the candidate pool so that New York could continue its proud tradition of sending superior people to the Senate. Goode does not believe that voting against gun control legislation aimed at reducing the illegal guns that commit 90% of the serious crimes in New York, is an example of superior leadership. Goode knows what it is like to comfort a mother whose child was killed by an illegal handgun. Ms. Gillibrand who has a 100% NRA rating as a congresswoman clearly has never had that experience.

Goode asks: What New Yorker if given a choice, would vote for a Senator who voted against preventing the collapse of the most important industry in the state? On January 15, 2009 a Crain’s NY editorial said, Rep. Kirsten Gillibrand, should be disqualified by her politically expedient vote against the original bailout bill. New York does not need a senator who can’t stand up for its most important industry. To win some support for her upstate congressional district Gillibrand called the bailout “fundamentally flawed.” Goode will support Wall Street Jobs but at the same time fight the special interests on Wall Street to make sure 401Ks and pension funds are not turned into junk bonds.

Ms. Gillibrand, a Democrat, opposed any sort of amnesty for illegal immigrants, supported deputizing local law enforcement officers to enforce federal immigration laws, spoke out against Gov. Eliot Spitzer’s proposal to allow illegal immigrants to have driver’s licenses and sought to make English the official language of the United States. She also campaigned against gay marriage in 2006 but now says she supports it. Goode charges that Gillibrand is out of step with New Yorkers. “Primaries give people a voice,” says Goode.

Gail Goode understands that her campaign faces many high hurdles. “Gillibrand has the advantage when it comes to money and supporters,” said Goode. “But New Yorkers agree with me on the issues.” Goode believes that many of our nation’s problems are caused by the type of person we send to Washington. Gail Goode believes that it is a matter of civic duty for average citizens to get involved and help solve our nation’s problems.

News Source: People for Gail Goode :: This press release was issued by Send2Press® and is Copyright © 2010 Neotrope® News Network – all rights reserved.