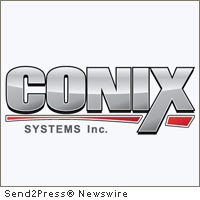 MANCHESTER, Vt. (SEND2PRESS NEWSWIRE) — Franks Stokes, president of technology for CONIX Systems, Inc. (CONIX), a leading international provider of payment processing solutions to the financial services industry and pioneer in the acceleration of exception processing, agrees with the Obama Administration that reducing systemic drains on the Federal budget by better policing benefits and other types of payments to eliminate “improper payments” will be a productive government debt reduction strategy. In fact, he’s been saying the same thing to financial institutions since 2008 when he spoke with Bank Technology News about the problems presented by duplicate checks to the banks’ image-enabled payment processing operations.

Signed into effect by President Obama today, the Improper Payments Elimination and Recovery Act targets deficit reduction by ending wasteful spending resulting from payments made in the wrong amount, to the wrong person, or for the wrong reason. In his remarks today, President Obama referred to a figure of $110 billion worth of “improper payments” made in 2009. Obama’s goal is to halve that amount to $50 billion by 2012 through increased audits and penalties.

“Improper payments have been a worsening hemorrhage for the Federal government for longer than a decade,” said Stokes. “Passage of the Improper Payment Information Act of 2002 was an early signal that the costs were headed even higher. Targeting a $110 billion source of government waste makes sense.”

Stokes added, “It is equally important that banks and payment processors look at the costs and risks created by the financial system’s own ‘improper payments’ dilemma presented by the marked increase in exception items within the payment stream. By this, I mean that there has been a notable increase in the level of fraud and systemic error in the payment processing environment as a whole,” said Stokes, “We talk about it all the time with our customers. Our primary focus as a company is to identify and resolve these issues.”

Recently, CONIX Systems, Data Support Services, Symcor Inc. and five banks (including BB&T, RBC, Bank of the West, Marshall & Isley, and Bank of Oklahoma) decided to combine their resources and experience to advance the development of a “transformational” payments processing capability for banks and the payment processing industry.

“Today’s payment processing is more complex and prone to risk than commonly understood, primarily because of the influx of image exchange and new payment types – such as check images through remote deposit capture, ACH, and debit card transactions,” Stokes further explained.

“These multiple payment types bring with them unique unintended repercussions, especially where the opportunity for error and fraud are concerned. The Social Security Administration’s decision to stop issuing paper checks in 2013 is a great example of the pressure that volume and proliferation of payment types are creating. Left unaddressed,” added Stokes, “payments processing is destined to be a source of significant cost and risk for banks, the government, the marketplace in general, and especially for the consumer/taxpayer.”

CONIX Systems, Inc. (http://www.CONIX.com) is a world leader in providing payment processing software and related services to the financial services industry. The company’s products perform key processing tasks for an estimated 100 billion paper and electronic items each year and handle virtually every aspect of payment processing – including work flow management, exception processing, early fraud detection, and image exchange. CONIX software and services are used by approximately 90 percent of the largest banks in the country. Founded in 1992, the company is headquartered in Manchester, Vt., with offices throughout the United States.