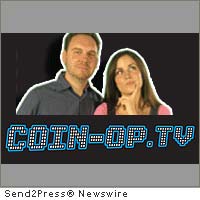 COIN-OP TV launched in the summer of 2004 as a monthly video podcast show about the video game industry, people and events. The show is a “who’s who” of the video game industry with a wide range of interviews including designers, collectors, world record holders, artists and more. DVD Volume 3 contains exclusive interviews with Atari founder Nolan Bushnell, Walter Day (Twin Galaxies), Kevin Pereira (G4tv’s “Attack of the Show” host), Robert Bowling (Infinity Ward) and more.

In 2006 COIN-OP TV restructured and re-launched as a weekly live/streaming show hosted by Robert Welkner and Hailey Bright. The new format featured studio guests, bands and video game demonstrations as well as live interaction via the chat room.

COIN-OP TV LIVE was the first independent live/streaming video program on the gaming industry and was named a Clicker.com finalist for “Best Live Show” and nominated for a Streamy Award in the “Best Live Production” category for 2009.

COIN-OP TV DVD Volume 3 is a “best of” collection from the third year of production – all episodes have been re-mastered for DVD featuring over 90 minutes of content.

News Source: COIN-OP TV :: This press release was issued by Send2Press® and is Copyright © 2010 Neotrope® News Network – all rights reserved.