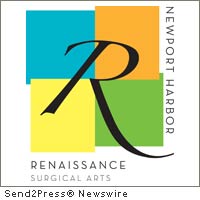 COSTA MESA, Calif. (SEND2PRESS NEWSWIRE) — Renaissance Surgical Arts at Newport Harbor today announced that it has met or exceeded compliance with the Joint Commission’s national standards for health care quality and safety, earning the Joint Commission’s Gold Seal of Approval. This is the second accreditation for Renaissance, the multispecialty ambulatory surgery center opened in August 2010 with its accreditation from IMQ (Institute of Medical Quality).

“Renaissance was designed to set a new standard of care by embracing the philosophy of Joint Commission and working to exceed national standards,” said Bruce Wallace, CEO. “We have worked very hard to bring together all available technologies, best practice knowledge and world-class physicians to build a facility that raises outpatient surgical care to new levels of excellence.”

Renaissance is a professionally managed, but majority physician-owned facility. With eight ORs and two procedure rooms, the 20,000-plus square foot outpatient facility demonstrates how to marry cutting edge technology in a patient-centric environment that is as beautiful as it is functional. Infection control was a paramount factor in driving the center’s design to take advantage of every available technology and best practice to eliminate the possibility of infection to patients.