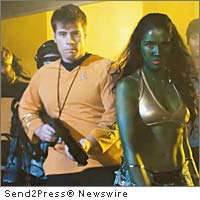 LOS ANGELES, Calif. (SEND2PRESS NEWSWIRE) — Epic Image Entertainment, Eyevox Entertainment and Paragon Design Group recently produced the book trailer Night of the Living Trekkies for Quirk Books publishing. The trailer, which was released on Sept. 14 has already had more than 90,000 views on YouTube and has received raving reviews from the blogosphere.

The book is the story of Jim Pike, the world’s biggest Star Trek fan-until two tours of duty in Afghanistan destroyed his faith in the human race. Now he sleepwalks through life as the assistant manager of a small hotel in downtown Houston. But when hundreds of Trekkies arrive in his lobby for a science-fiction convention, Jim finds himself surrounded by costumed Klingons, Vulcans, and Ferengi – plus a strange virus that transforms its carriers into savage, flesh-eating zombies! The book, “Night of the Living Trekkies” (ISBN-13: 978-1594744631), is currently available on Amazon.

Becoming more common in the book publishing industry, but usually not as complex, the Night of the Living Trekkies book trailer was directed by Justin Lutsky from Epic Image Entertainment, written by Opie Cooper and produced by Eyevox Entertainment. Savannah-based Paragon Design Group provided motion graphics and worked with Mad Genius Inc, a sister company of Eyevox Entertainment, on visual effects.

Cooper says the trailer has hit a chord with viewers, in particular Star Trek fanatics, “The trailer takes the viewer on a gory ride that strikes the perfect balance between humor and geekiness, packed full of insider references that will likely go unnoticed by all but true Star Trek fans.”

Though the project was done in a very short time frame with partners spread across the country, Lutsky says the finished project is something that all the partners can be proud of. “The level of sophistication and detail involved in the trailer speaks to the unfathomable talent of everyone involved. I am extremely proud of each partner and the end result of the Night of the Living Trekkies trailer,” said Lutsky.

Susan Isaacs from Paragon Design Group agrees that the trailer was an opportunity for them to showcase their talents in a not so conventional way. “Zombies and gore are not really typical of the type of graphics we do, so this was a fun departure for us,” said Isaacs. “In the end the experience is all about the creative collaboration and this was a great group of people to work with.”

Quirk Books has been delighted with the trailer and its impact on book sales. “When we initially approached Justin about doing the trailer we had no idea how ambitious his creative team would be. Needless to say we were blown away!”

The group is already working on a number of additional projects including a reality show and a horror anthology with a twist. There is also some discussion about a feature film version of a zombie attack at a sci-fi convention.

Night of the Living Trekkies can be viewed at
http://www.youtube.com/watch?v=MyO2k-jApng .