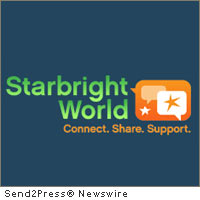 LOS ANGELES, Calif. (SEND2PRESS NEWSWIRE) — Having a chronic or life-threatening medical condition makes it hard for teens to cope with the already difficult realities of being a teenager. Supporting a sibling with an illness can be daunting as well. That is why Starlight Children’s Foundation created Starbright World (www.starbrightworld.org), an online social network for sick teens and their teen-aged siblings – to provide a community of support and a much-needed distraction from daily struggles.

Over the past two years, Vivendi has provided leadership gifts for the critical preproduction and production phases of the Starbright World(R) redesign, earning recognition as the signature sponsor of the site. Vivendi recently renewed its support of Starlight once again through another generous award. The latest gift will be used to introduce new and enhanced features on Starbright World to satisfy the ever-changing expectations of its young community and keep the site on par with other popular social networks.

Many teens living with serious illness are isolated-both physically and emotionally-and feel left behind by friends. Starbright World enables teens to connect, socialize and establish meaningful relationships with others who are struggling with similar issues. In late 2009, thanks to generous contributions through Vivendi’s Create Joy Fund, Starlight unveiled its next generation of Starbright World, which brought the latest in social networking technology to the site. Starbright World members connect with each other via chat, take part in virtual contests and games, and express themselves through stories, photos, videos, e-cards and personal profiles.

“Vivendi is proud to be the signature sponsor of Starbright World as part of the company’s commitment to supporting children and teens who struggle every day with life-altering medical conditions,” said Flavie Lemarchand-Wood, Vivendi’s director of communications in North America. “Since our involvement, Starbright World has increased its membership by an estimated 42%. The Starbright World community is an incredible example of how technology and heart can bring the digital generation together in innovative ways.”

“We were so honored when Vivendi funded the rebuild of Starbright World,” said Jane Van Stedum, Interim Executive Director at Starlight. “Membership on the site is at an all-time high. Our teens report they absolutely love the new features, which allow them to find others with similar challenges and express themselves in a safe and accepting environment. Vivendi has been instrumental in ensuring that Starbright World incorporates cutting edge technology and remains an engaging hotspot-and emotional lifeline-for seriously ill teens.”

Since its debut in 1996, Starbright World has helped thousands of teens, ages 13-20, build on friendships, create new ones, and cope with their illnesses. “Research studies have demonstrated the very real benefits of Starbright World, which include a reduction in pain, anxiety, loneliness and withdrawn behavior, and an increased willingness to return for medical treatment,” said Joseph Bush, Ph.D., associate dean for research, Fielding Graduate University’s School of Psychology.

Visit www.starbrightworld.org to learn more about Starbright World and how to register. To keep the site safe, parental consent is required for membership, and the chat rooms are monitored at all times by trained, paid adult staff.

In 2009, Vivendi achieved revenues of EUR27.1 billion and adjusted net income of EUR2.6 billion. With operations in 77 countries, the Group has over 49,000 employees. www.vivendi.com .

When a child or teenager has a serious medical condition, everyone in the family is affected. For more than 25 years, Starlight Children’s Foundation has been dedicated to helping seriously ill children and their families cope with their pain, fear and isolation through entertainment, education and family activities. Starlight’s programs have been proven to distract children from their pain, help them better understand and manage their illnesses, and connect families facing similar challenges so that no one feels alone. Through a network of chapters and offices, Starlight provides ongoing support to children, parents and siblings in all U.S. states and Canadian provinces with an array of outpatient, hospital-based and Web offerings. Programs are also delivered internationally through affiliates in Australia, Japan and the United Kingdom. To learn more visit www.starlight.org .