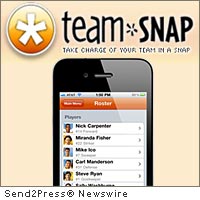 “A huge number of our customers are iPhone owners,” says Dave DuPont, TeamSnap CEO. “This new app makes it even easier to get important information about your team, roster, schedule and messages at the most important times, like when you’re on the go or at the game.”

– Complete Roster Information – the team at your fingertips;
– Team Schedule – times, locations and maps of all games and practices;
– Set and View Availability – make sure that you have enough players;
– View and Upload Photos – right from the game;
– Read Team Messages – from the manager and other players;
– Comprehensive Team Communications – email or text the entire team (coming soon);
– Incredibly Easy To Use – Immediately intuitive interface; nothing to learn.

Initial feedback has been overwhelmingly positive. The App Store shows a 4.5 out of 5.0 rating with customer reviews highlighting the easy-to-use interface:

“You have made our lives so much easier with TeamSnap app. Easy to navigate and view and all info right on my fingertips.”

“I figured out where everything was within seconds of logging in.”

TeamSnap expects the new iPhone app to accelerate the already impressive growth of the company’s flagship online application. TeamSnap is in 94 countries and is being used by more than a half million users.

DuPont says the goal of TeamSnap is to help volunteers and parents everywhere. “We’re helping them free up time to focus on the activity itself instead of the other things that are going on in their lives. The iPhone app extends that functionality.”

The app is free and available for download from the Apple App Store at: http://itunes.apple.com/us/app/teamsnap/id393048976?mt=8 .

The TeamSnap Web site is at: www.teamsnap.com .