You are here: Home › Biotronics, Inc. Announces a Noninvasive Instrument That Can Determine Pork Loin Marbling Level in Milliseconds
By Send2Press Newswire on October 21, 2010 in Agriculture and Farming, Iowa, Press Releases 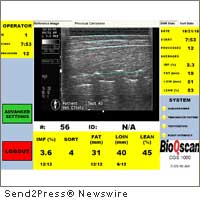 A recent journal research article supported by researchers at Colorado State University and Ohio State University also found a positive relationship between increased marbling levels and ultimate pH, a major industry standard for measuring pork quality. Years of selection for lean hogs in the USA have removed much of the intramuscular fat from the loin muscle, the fat that provides juiciness and flavor. Loss of natural pork flavor and juiciness has been replaced with salt solutions and flavor enhancers injected into the meat by processors.

Doyle Wilson, President of Biotronics, Inc. (www.biotronics-inc.com) states that, “This new instrument, called BioQscan, has now been tested on more than 20,000 pork carcasses and has proven its ability to operate effectively at chain processing speeds exceeding 1,200 carcasses per hour.” Wilson says that within milliseconds of the BioQscan(R) probe being placed on the skin of a pork carcass, the marbling level is known, allowing each carcass to be differentiated relative to its quality.

Biotronics, Inc. has spent the last 5 years developing and perfecting this technology and is now gearing up for commercial production. An added benefit to the technology is its ability to accurately measure backfat depth and loin depth through noninvasive means, two important traits in the determination of pork carcass percent lean. Pork producers could receive added payment benefits for carcasses meeting minimum marbling specifications while maintaining high percent lean values.

Foreign buyers of pork loins from the USA will be carefully watching this new pork loin grading technology. While many foreign buyers like the majority of the pork they procure from the USA, quality assessments are at best rudimentary, with loins being visually sorted by loin color and perhaps some attempt at marbling level by looking at the outside of skinned boneless loins.

The new BioQscan(R) technology allows the packer to place an instrument graded marbling level on each loin, guaranteeing that it meets minimum levels of marbling. The adequate level of marbling almost always guarantees that each and every pork chop will be juicy and have plenty of good old fashioned flavor.

It is expected that the U.S. high end restaurant chefs will also take a keen interest in this new technology. Pork flavor will increase significantly when marbling is put back in the pork loin.

News Source: Biotronics, Inc. :: This press release was issued on behalf of the news source by Send2Press® Newswire, a service of Neotrope®.